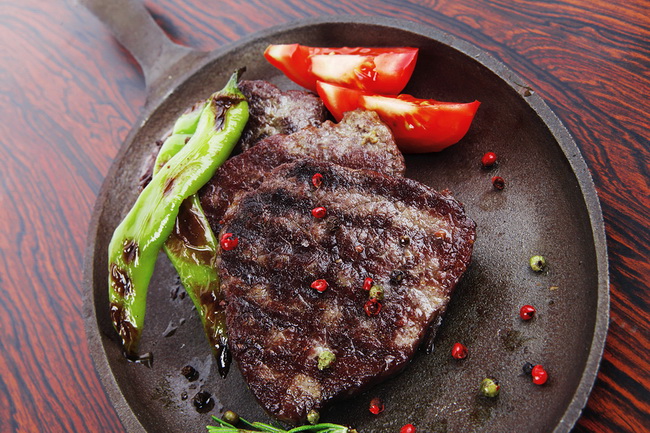 Some people believe that with acidic foods, such as tomatoes, the acid will leech into the pan or somehow react with the metal and give your foods an off or ill tasting flavor and might even kill you.

Well, alright, perhaps no one used the words “kill you” but people make it sound as if cooking tomatoes in a cast iron pan is the worst thing in the world and you are better off using Teflon for that. Baloney! If your pan is well-seasoned, your food is actually sitting on the layer of polymerized oil, not actually on the metal itself.

2. Cast Iron Heats More Evenly Than Any Other Pan

Absolutely not true. The truth is cast iron will have hot spots where the flame is and much cooler spots where the flame is not touching the pan. One of the great things about cast iron, however, is that once the pan is hot, it stays how for a long time. So if you want to sear a steak, you can do this by letting your pan preheat for about 10 minutes, turning it every two minutes, before you put that steak on.

3. Cast Iron Pans are a Pain to Maintain

Some people mistakenly believe that cast iron pans will rust heavily when not used daily or that the slightest bump will chip off the seasoning. You wonder if these people have ever really used a cast iron pan. These pans are as tough as their name implies. This is why you see 75 year old pans still being used. New pans come pre-seasoned and can be used right away but even when you season your pans yourself, it won’t chip off. Stack those pans on top of each other, it’s just fine. If they are dried after being washed (which is our next subject) they won’t rust. Really.