For thousands of years, people in East Asia have drunk tea for both its pleasant taste and reputed health benefits. In the 17th century, tea began to spread across the world and became popular in the new cultures that adopted it. One of the claims surrounding the consumption of tea is that it can boost the metabolism and help one lose weight. Is there any veracity to this?

Modern science has been able to shed light on many such claims surrounding food, drink and folk medicine and show which ones are legitimate and which ones are not. In the case of tea, it turns out that it can, in fact, play a beneficial role in helping you lose weight, but you won’t see these benefits by just drinking any old tea. The type of tea is the most important part of the equation.

The teas which have been shown to be the most beneficial for raising the metabolism are white tea, oolong tea and green tea, followed by rooibos and ashwaganda. Here’s where things get a little confusing: the first three are technically all the same tea.

White, oolong and green tea all come from the same plant, camellia sinensis, otherwise known as “true tea.” The type of tea and the specific health benefits it imparts depends on how the tea is harvested and treated.

The super healthy tea most people are familiar with is green tea. This type of tea is made with unoxidized tea leaves which have been picked and dried before they wilted. This variety is very rich in vitamin C and is packed with antioxidants. Many of these antioxidants are calledcatechins, the most potent of which is epigallocatechin gallate, or ECGC, which is known to play a role in boosting the metabolism.

Oolong tea differs in the sense that the leaves are allowed to wilt and oxidize slightly before processing. This contributes to a stronger flavor and a higher caffeine content, which can help slightly boost the metabolism. Like green tea, it is also high in catechins. 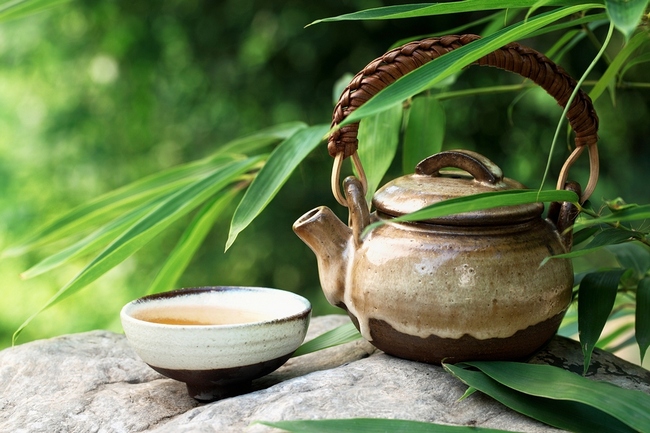 White tea is a little harder to find, but it might be the healthiest of the three. Like green tea, the leaves are not allowed to oxidize, but white tea is made only from the youngest leaves of the tea plant. White tea has the most antioxidants of any variety of true tea.

The other “teas” do not come from the tea plant, but are traditionally consumed in a similar manner, thus falling under the category of “tea” in most people’s minds. Ashwaganda, also known as Indian ginseng, is a type of plant native to India that has been used in traditional medicine for thousands of years. One of its chief applications was lowering stress. Science has shown that it does this by lowering the body’s levels of cortisol, commonly known as the stress hormone. When cortisol levels are high, the body is more likely to store extra fat.

Rooibos is a plant native to sub-Saharan Africa, and the beverage derived from it is often marketed as red tea. Rooibos has traditionally been used to lower stress and improve blood circulation. Research has shown that it also contains flavanols and polyphenols, which can aid in reducing the formation of new fat cells.

But will tea really make you skinny?

Let’s not get carried away here.

It’s important to keep in mind that while green, oolong and white tea are very healthy, the cold hard truth is that there is no “magic bullet” solution for losing weight. If you’re overweight and you want to change that, you need to change your lifestyle and eating choices, period. If losing weight was as simple as just drinking some tea, no one would ever be overweight.

That said, every little bit helps. Studies indicate the teas do at least assist in raising the metabolism, which is a step in the right direction. Each of these teas has so many health benefits that there is no downside to incorporating one into your diet. Just be sure not to drown it in cream and sugar, as this will negate the health effects.