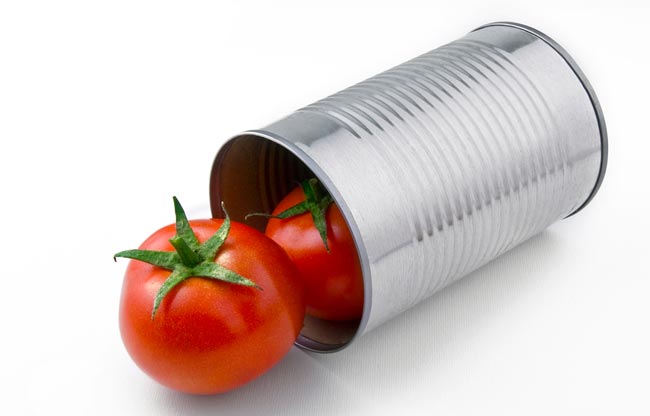 It’s probably not something you think about every day, whether or not the foods you are eating could contain carcinogens, but with almost 1.5 million people diagnosed with some type of cancer just last year, perhaps it’s time to look at what is in our foods that could be causing such a huge number of new cancer patients. Here is a list of the top 16 foods that you most likely consume every day that may contain carcinogens or be suspected of causing cancer.

While fresh tomatoes are actually considered to be the cancer fighting foods, those canned ones are nothing like that. Actually, most canned foods are a concern because of what the can is lined with. The lining of almost all canned foods are made with a chemical called bisphenol-A, or BPA.

A study published in May of 2013 by the Proceeding of the National Academy of Sciences showed that BPA actually affects the way genes work inside the brain of rats. Even the FDA agrees that there is a problem with BPA as it is supporting efforts to either replace or at the very least, to minimize the amounts found in canned foods. You know it must be bad when even the very lax FDA is concerned!

Tomatoes are believed to be exceptionally dangerous due to their high acidity, which seems to cause BPA to leech from the lining of the can into the tomatoes themselves. The level of BPA can be so high in fact; you should seriously consider not feeding them to children. Due to FDA laws, there are no standards for labeling BPA so simply because a can does not say it has it does not mean that it does not contain BPA. Be safe and avoid cans. Cook fresh or buy glass bottles.

PrevPage: 1 of 17Next
View all