Kurt Nimmo from Infowars.com reported today that transmission of the Ebola virus through the air isn’t possible. Well, Kurt, that information is just plain wrong. Although his article “Don’t Fear Ebola, Fear the Stat”, is a wonderfully written piece, it’s factually incorrect and this issue should be addressed.

Ebola CAN hitch a ride on aerosolized particles of mucous, blood, or other bodily fluids. This means that if someone with Ebola should sneeze, for example, this can allow the Ebola virus to fly through the air, where they can land on your hands, or face. Just one microbe of this virus entering through the corner of your mouth or the corner of your eye, can give you a full blown Ebola infection. 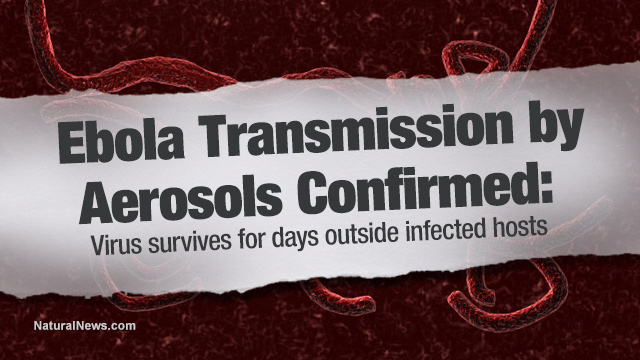 Back in 2012, the BBC printed an article titled “Growing concerns over ‘in the air’ transmission of Ebola”. This article states that scientists in Canada have discovered that the most deadly form of the Ebola virus could be transmitted through the air between species. In their experiments, they showed that this virus could be transmitted from pigs to monkeys without any direct contact. For this experiment, they put infected pigs in pens with monkeys in separate pens, but nearby. After only 8 days, some of the monkeys were showing symptoms of the Ebola virus.

Even worse, something you won’t hear on the mainstream news is that Ebola is a very strong survivor and can live outside a living host. According to the Public Health Agency of Canada, this virus can live in liquid or on dry material for several days. It can survive in temperature at about 4 centigrade (about 39 degrees) for several days. This mean Ebola can survive for a few days on things such as door handles, or other household surfaces. So if an infected Ebola patient should touch common objects, such as door knobs, handles, or car seats, another innocent victim could very easily become infected himself from touching those same objects and then putting his hands in his eyes, mouth, or nose.

Now the remainder of the Infowars articles is dead on, saying that “Ebola is being exploited and exaggerated as part of a psychological operation by government.” This is 100 percent true. Any infectious disease announced by the government is going to be used to control the population.

All natural disasters, diseases, and even crises that are man-made are exploited by governments as pretexts to both enlarge and extend their power and reach. The state thrives on every crisis, whether real or not, as part of a systematic effort to keep us under control and ramp up their police state tactics. Their goal isn’t what you would think. It’s not protection of the people, it’s about becoming a surveillance state with a militarized component that is not deployed to save us from terrorists, or even deadly diseases, but to control the populace and maintain a feeling of fear.

The discussion about the “fast tracking” of Ebola vaccines should have everyone very, very concerned. This could mean that the government intends to mandate vaccines for all Americans and this would quickly turn into a public health disaster.

But the main point that everyone needs to full understand is that even though governments will exploit Ebola doesn’t mean that it isn’t a deadly virus with the ability to spread through the air. Everyone needs to be informed about the real risk of exposure to these deadly pathogens, just in case a pandemic is somehow released across America.

Ebola is very easy to catch.

Those of us who are always skeptical about those “official” statements from the government must remember that, just because the government can benefit from a pandemic, this doesn’t mean that a pandemic can’t happen. Don’t let your guard down and think that Ebola isn’t all that hard to catch because the truth is; it IS easy to catch.

The only way that it would be hard to catch this virus would be if you were nowhere near it or anyone who has it. Ebola is like an out of control wildfire in Africa, but if you’re not in Africa, then of course it’s hard to get it, because it can’t cross the Atlantic Ocean on its own! However, if you are in the same room with someone infected with Ebola, it’s super easy to catch this and guess what? The U.S. health authorities, who are supposed to be looking out for us, are actually importing this deadly virus into America right now. They are flying two Ebola patients to Emory University in Atlanta.

Ebola is marked as a level 4 biohazard. If it were difficult to catch, then you wouldn’t see people wearing those protective head to toe biohazard suits when they are working near patients who are infected.

No matter what the government is telling us, Ebola is extremely dangerous and highly contagious, with a proven ability to spread through the air via aerosolized particles. Be careful, friends, be very, very careful.