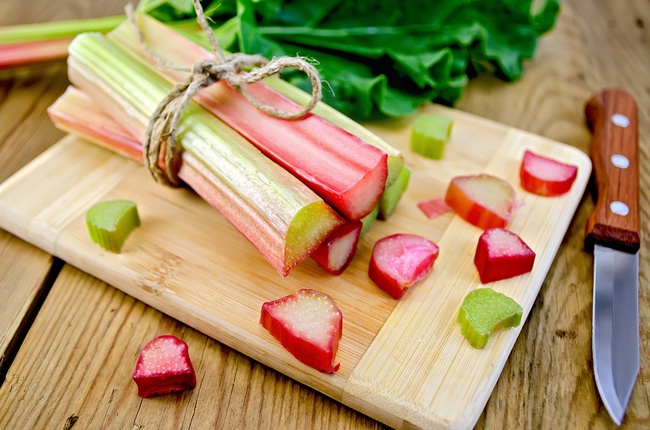 Recent studies have found that the rhubarb vegetable might be effective at treating hepatic encephalopathy, a side effect of chronic liver disease that manifest itself with changes in behavior, sudden mood swings, inappropriate sayings, and sometimes a change in personality. The study was published in the Journal of Traditional Chinese Medicine and rhubarb is very popular in Chinese medicine for all kinds of ailments. This study focused on using rhubarb-based Chinese herbal formulae (RCHF) and only on how it would help those that displayed symptoms of hepatic encephalopathy due to chronic liver disease.

Hepatic encephalopathy is an ailment of the brain in which toxins from the liver are thought to build up in the bloodstream from the liver not working properly. These toxins are then taken along with the blood to the brain and are ‘lodged’ there. Eventually, a buildup can interfere with the brain’s functions and the patient starts to experience certain symptoms. Not everyone experiences the same issues, but some common effects include getting confused, nervous or excited, becoming cranky, saying inappropriate things or acting inappropriately, not feeling interested in things, and having sudden changed in personality or behavior.

Rhubarb has been used for many different ailments in Chinese medicine and most often for gastrointestinal issues, as the plant is high in fiber. It is available as a treatment in its raw form, as supplements, and as juice. The leaves of the rhubarb plant should never be eaten as they are high in oxalic acid and therefore toxic to humans. Rhubarb has strong sour taste and thus most people find it off-putting, but prepared the right way it can be delicious. When juiced, only the stalk of the plant should be juiced and it is usually combined with other juices as the rhubarb juice is sour. Rhubarb can also be pickled or preserved and it will usually be so in a sweet syrup or directly in honey to combat the taste of the vegetable. The vegetable grows best in cold areas and is prevalent in Siberia, where it got its start.

Rhubarb is high in Vitamins K, C, A, and B-complex and has healthy doses of folate, riboflavin, niacin, and pantothenic acid. The vegetable is also high in iron, potassium, and phosphorus and includes 32% of the daily value of manganese per serving. These vitamins and minerals also make rhubarb ideal for use as a poultice for fevers and swelling and as a supplement for promoting good bone health, to limit neuronal damage for Alzheimer’s patients, as a powerful antioxidant, for good vision, and protecting against lung and mouth cancers (and cancers in general).

The study focused on testing the levels of ammonia and alanine aminotransferase in the blood since those two factors are generally present in the blood when the liver is intoxicating the blood. Alanine aminotransferase is most commonly found in the liver in the human body and the levels of it are a common indicator of liver health. It was hypothesized that the indicators of these two chemicals in the bloodstream would lead to causing a toxic environment in the brain and thus leading to hepatic encephalopathy. The study published in the Journal of Traditional Chinese Medicine hypothesized that rhubarb would also be beneficial for inhibiting gut bacteria translocation and decrease intestinal permeability at the early stages of sepsis, another side effect of chronic liver disease.

The researchers set up three comparisons for the study, based on what are the most common treatments in China, and they were as follows: comparing conventional treatments with a combination of conventional treatments and RCHF; comparing RCHF with lactulose treatment; and comparing RCHF with vinegar treatments. All three comparisons found that RCHF patients had significant improvements in their ammonia and alanine aminotransferase levels in their blood when compared to the other groups of patients that received other treatments. Their data also showed that RCHF was also beneficial at inhibiting bacterial translocation and protecting the gut barrier.

Another study found that RCHF might also be beneficial to those with severe hepatitis B. RCHF was shown to decrease the levels of lipopolysaccharide, and along with its ability to protect the gut barrier, RCHF might be helpful in helping spread and advance hepatitis B in patients. Hepatitis B is a liver disease, one of the most common liver diseases, and the study focused on severe chronic hepatitis B patients.

Rhubarb has certainly shown itself to be a potent ally in the fight against liver diseases and their associated illnesses. Although it has been used in Chinese medicine for many years with success for various health issues, rhubarb might now become more accepted by the Western world as well as a legitimate treatment for hepatic encephalopathy, an associated illness induced by liver cirrhosis. It might particularly be effective in conjunction with other conventional medicines and treatments. Even if you are not suffering from a liver disease, rhubarb is a great vegetable to add to your regular repertoire of foods. Not only is it high in vitamins and minerals, but it also grows abundantly in cold areas, where other nutrient-rich foods might be lacking or not be able to be grown. Eating this wonderful vegetable will help you feel better overall, no matter your state of health.

Related Posts
benefitshealthhealth benefits
Help Us Spread The Word!
Like Us On Facebook To Stay Updated!
I'm already a Naturalon fan, don't show this box again.