Why Does Alcohol Make You Sleepy? 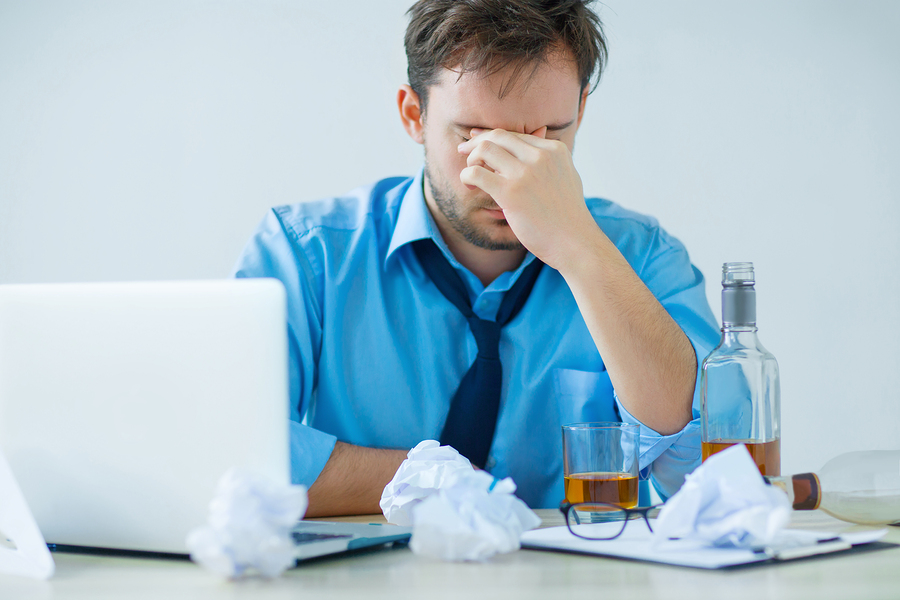 You probably know the feeling: a beer or two in, you start feeling much more relaxed, perhaps a little uninhibited. Eventually, though, you start to feel sleepy. Sooner or later you pass out, only to wake up a few hours later feeling tired and restless. Booze has a way of making people feel tired, but paradoxically, it can also make it difficult to fall asleep. Prior to the development of modern neuroscience, no one ever really understood why. New discoveries have shed some light on why alcohol has such distinct effects on the brain.

What alcohol does to your brain

As with any other system in the body, the answer to the question of why alcohol does what it does to your brain can be found in biochemistry. Alcohol affects protein compounds in the brain, including the receptors for a neurotransmitter called GABA-A (gamma-aminobutyric acid-A). Over 80 percent of neurons (brain cells) in the human brain contain receptors for GABA-A, which means that the majority of them will be affected by alcohol.

What happens is that the alcohol will bind with these GABA-A receptors and allow chloride ions to pass into the brain cell. This causes the neurons’ firing of electrical signals to slow down, which manifests itself as the sensation of being tired, woozy and relaxed. The more this process continues, the drunker that person will become, and, over time, the more tired they will feel. If neuronal firing slows down too much, the person could fall into a coma or die, but most people stop drinking long before it gets to that point.

This interference with neuronal function will also produce the poor physical coordination and difficulties with memory and concentration that are associated with intoxication.

You might be thinking, “Okay, we’ve established why alcohol makes you sleepy. But how is it possible that the same the chemical that induces sleepiness can also disrupt sleep?” It turns out that GABA-A and its receptors are the key to unlocking this mystery as well.

After a few hours of exposure to alcohol, something significant happens to GABA-A receptors. The receptors become desensitized to both the GABA-A and the alcohol. As a result, the receptors retreat from the surface of the brain cell into the center, a process known as “receptor trafficking.” Here’s where it gets interesting: once these receptors have relocated inside the brain cell, they’re no longer able to be affected by the alcohol or GABA-A, and can’t let more chloride ions inside the cell. Since there are no more chloride ions entering the cell and slowing down neural firing, the brain cell begins firing neural impulses faster than they normally would. This is what happens when the person who had been drinking now finds themselves restless and unable to sleep.

Someone with a normal, healthy brain can produce new neurons within a few hours and recover from this process. Someone affected by alcoholism, however, will have difficulty synthesizing new GABA-A receptors quickly enough, and they’re much more likely to experience negative effects of alcohol withdrawal, such as anxiety and dysphoria, according to Professor Leslie Morrow at the University of North Carolina School of Medicine.

What’s the takeaway from all this? Now that you know exactly how alcohol consumption affects your brain, be mindful of how much you drink! It’s okay to drink alcoholic beverages in moderation, but understand your own tolerance for alcohol, and be aware of the alcohol content of the drinks you choose to consume. Many drinks, particularly shots or cocktails with lots flavoring, may good down much smoother than straight liquor. It’s easy in such cases to take in a lot more alcohol than you intended to. Know your body and use common sense.

The brain is an amazing tool, but chemical compounds from the foods and drinks we enjoy can influence it in positive or negative ways. If you want to be mentally sharp and clear, make sure you’re eating and drinking quality nutrients, and not just junk food and drugs (alcohol is a drug). Your body and brain will thank you for it.