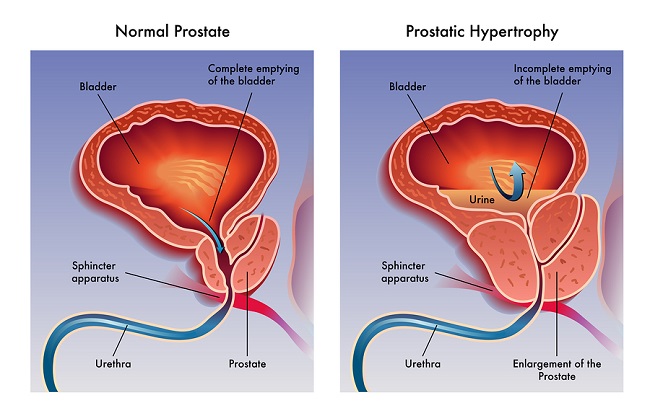 Men are well-known for being wary of doctors, especially if they have to talk about sensitive topics like ED (erectile dysfunction) or their prostate. This is probably the reason why many men go looking for over the counter herbal remedies for their prostate problems.

An enlarged prostate is known to your doctor as benign prostatic hyperplasia (BPH). This small muscular gland, about the size and shape of a walnut, surrounds the urethra and sits just below the bladder. It adds fluid to semen to allow sperm to move easily. As men age, the cells of the prostate typically begin to multiply, which can eventually lead to an enlarged prostate. The exact cause of this problem is not yet known, but it is thought that the changes in male sex hormones that naturally come with age might be a major factor.

Other risk factors for an enlarged prostate are diabetes, heart disease, family history, and obesity. It also tends to be more common in Asian men than other races, but the reason for this is unknown. Most men have few or no symptoms, eventually, however, most men experience severe symptoms that can interfere with their quality of life.

Some symptoms of an enlarged prostate are:

If left untreated, BPH can eventually block the flow of urine, which can lead to urinary tract infections, bladder stones, and even kidney damage.

If you think you are experiencing an enlarged prostate, you should check with your urologist first. Ask your doctor if any of the following 12 remedies might help you with your BPH or if there might be any drug interactions if you are taking prescription medications.

This is perhaps the most popular herbal treatment for prostate problems in the world. This herb comes from the berry of the American dwarf palm tree. It has been used to treat prostate problems as far back as the early 1800’s. Saw palmetto is especially popular for those how have a weak urine flow or feelings of needing to urinate frequently. One survey in Consumer Reports stated that half of the men who tried saw palmetto said it eased their symptoms “a lot” or at least “somewhat.”  As far as studies go, one study that involved 85 men found that men who took saw palmetto capsules over the 6 month study period had fewer symptoms than those who took a placebo. This study was published in the December 2001 issue of the journal Urology.

Pelvic strengthening exercises, commonly known as Kegel exercises, can help to ease some of the symptoms of an enlarged prostate. Most people think of these exercises as something only for women, bu these can also help men, too. To do this exercise, empty your bladder, then lie on the floor with your knees bent and apart. Tighten your pelvic muscles (the same muscles you would use to stop your urine flow) for a count of, and then relax for a count of 5. Try to do this 10 times and work up to 20 times. Start with one set of 10, twice each day and eventually work up to one set of 20, three times each day.

Zinc is an essential trace mineral that is important to the body’s immune system. This mineral is found in the cells of the prostate where it plays a protective role preventing inflammation. Taking a zinc supplement can help to shrink the prostate gland. Oregon State University conducted a 2007 study which showed that a zinc deficiency might impair the proteins in the prostate that contain zinc, which can lead to abnormities in the growth and function of the prostate. If you decide to take a zinc supplement, 90mg is the normal dosage, taken in three 30mg doses. You can also eat more zinc rich foods such as beans, yogurt, cashews, crab, and oysters.

Related Posts
how tomen's healthnatural remedies
Help Us Spread The Word!
Like Us On Facebook To Stay Updated!
I'm already a Naturalon fan, don't show this box again.