Zombies are the latest popular theme in television programming and theme parks. Now it’s also a popular theme for emergency planning. Kansas state declared October to be “Zombie Preparedness Month” and the CDC conducted the same type of campaign in 2011, in which more than 65,000 people signed up for an online course that would cover stopping the spread of infectious diseases, emergency preparedness, and managing stress during disaster situations.

There are even apps in disaster preparedness, like the Apocalypse Survival Guide. Zombies are just one possibility to the end of the world scenarios, and this plan allows friends or family members to make emergency plans together.

Seriously, if you are ready for zombies, then you are really ready for anything, are you not? Did you know that even the Pentagon has considered zombie survival scenarios? Now that’s some serious business!

A spring survey of almost 6,000 adults done by Tada.com found that 20 percent of those surveyed worried about tornadoes, hurricanes and earthquakes were tied at 14 percent, blizzards and floods at 12 percent but other people did mention in this survey that they were concerned about Obamacare, alien invasions, and, yep, zombie attacks.

The thing about zombies is that they capture the imagination the way natural disasters don’t. You can even laugh it off should a friend ask why you bought that water storage tank. “Oh, I got it to prepare for the zombie apocalypse, dude!” Your friends will laugh along with you, rather than think you are a survivalist nut.

SEE ALSO: Ebola Has Arrived in the US – 10 Ways to Prepare and Protect Yourself

Since a recent survey shows that only 34 percent of Americans have disaster supplies at home, and only 27 percent say that they have a family plan for emergencies, whatever works to get people motived to prepare is a good thing.

Although no one likes to think about a disaster happening, and still others maintain that “it won’t happen here” mindset, so if it takes planning for a zombie apocalypse to make things happen then it’s better than having no plan at all. 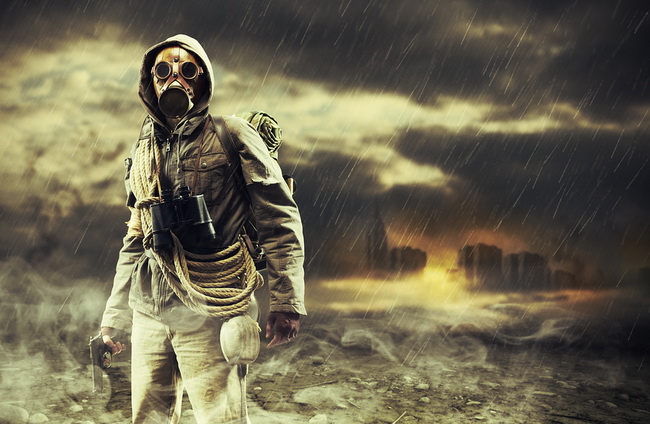 Does this sound a bit crazy? Think about it, if the best place to hide in your home during a zombie apocalypse is, say, the cellar, then that’s probably the best spot for you to hide in case of a tornado, also. Are you running from thousands of the undead? Which would be the best way out of town, how would you go if perhaps cars were out of the question, and where would you go? You are going to need at least a few supplies, right? So what would you pack in your backpack? Extra glasses, medication, flashlights, batteries? Getting your significant other and family members to start talking and planning for a zombie attack can get them to talk about vulnerabilities and other problems they might not want to talk about for more boring scenarios like earthquakes.

There are some people who are simply too afraid to think about what they might do in the event of a disaster. These types of thoughts paralyze them with fear about how they would cope and what if they made the wrong decision? They might feel completely incapable of dealing with a hurricane or earthquake, but laughingly making plans to avoid hordes of the walking dead? Well, that’s something they can probably do.

You don’t have to go all out zombie preparedness, though. Don’t think about trying to fit a chainsaw or crowbar in your backpack! However a first aid kit, bottled water, batteries, flashlights, a battery powered or crank radio, and some extra food would go a long way in keeping you ready for an earthquake or a zombie mob.

You might also want to think about a family plan, you know, in case those zombies come while everyone is at work or school. Make a plan about where you will meet up, and how they might get there to avoid as many of the walking dead as possible.

An Ebola preparedness plan might be too far out there, it probably will never happen. But a zombie attack on the mid-west states and a Godzilla attack on the west coast, now those are things we should really all take into consideration!