If you or someone you love has arthritis, then you know the pain, swelling, stiffness, and loss of joint function that comes with this chronic, autoimmune disorder. In addition to the pain and swelling, those with arthritis are at a great risk of developing lymphoma and heart disease as well.

Although both environmental and hereditary factors come into play in the occurrence and aggravation of arthritis, most people seem to develop this disease as they age from overuse of the joints involved.

Most drugs used to fight this chronic disease fall far short of expectations. Other alternatives can be very expensive and have terrible side effects in the long term. This makes natural, botanical-based alternatives very attractive. Many studies have shown that many herbs, especially those from China, have been very effective in fighting arthritis, offering millions of people much needed relief.

Keep reading for some of the top 15 herbs that have been proven to be effective in fighting the pain and swelling of arthritis.

This is perhaps one of the oldest herbs used in Chinese medicine for arthritis pain. The roots are skinned and then extracted to make a compound that works well at suppressing the overactive immune system. This effective herb with the funny name is best used in a topical form that can be applied directly to the affected joint. This herb can be poisonous if any other part of the plant is used, so be certain that you are buying this herb from a very reputable source.

Licorice root acts very much like cortisone, but without the terrible side effects. Scientific studies have shown several times that the phytochemicals in the root of this herb have both anti-arthritic and anti-inflammatory compounds. Licorice root has been shown to inhibit the production of enzymes that are directly responsible for the inflammation that causes arthritis.

This popular plant extract is readily available all over the world and is frequently used in topical oil extracts for a wide variety of health conditions. Topical treatments containing eucalyptus are often used to treat the pain of arthritis. Eucalyptus leaves contain tannins, which help to reduce swelling and therefore, the pain of arthritis. Many people say that they apply a heating pad to the area after applying a topical treatment of eucalyptus will maximize its effectiveness.

Many research studies list arthritis as one of the many diseases that free radicals cause. Green tea has been found to work in synergy with other herbs to promote anti-oxidant agents to fight free radicals. The herbs that work best with green tea are ginkgo biloba and grape seed extract. Since green tea works best when it is combined with low doses of these other herbs, researchers suggest that this is a great way to avoid the potential side effects that arise from high doses of any one herb.

This is a terrific anti-inflammatory herb that can reduce the swelling for those with arthritis. This tropical vine has been used since the times of the Incas. Although traditionally, cat’s claw has been used to improve the immune system, recently, the herb has been investigated for its ability to help with arthritis. Too much cat’s claw can actually overstimulate the immune system, which might make your arthritis pain even worse. The University of Maryland Medical Center states that their studies show that this herb can help those with osteoarthritis pain but there is no proof that it can prevent damage to the joints.

This spice, which is found in curry powder, is perhaps one of the most powerful anti-inflammatory agents in the world. The active ingredient in turmeric is curcumin, which can help to relieve the swelling and pain associated with arthritis. One study conducted with rats showed that curcumin stopped the specific molecular activity that has been linked to the onset of arthritis. Additionally, unlike many pharmaceutical drugs, turmeric not only does not cause liver damage; in fact, turmeric supports healthy liver function.

This is a popular anti-inflammatory herb among those who practice alternative medicine. This herb comes from the gum of Boswellia trees, which are found in India. Sometimes called frankincense, this herb works by blocking leukotrienes, which attack healthy joints in autoimmune diseases such as arthritis. Most studies done have only involved animals and not humans. You can buy Boswellia extract in tablets or in creams that are topically applied to the affected joints.

Some research shows that concentrated willow extract can be effective when it comes to reducing the inflammation and pain of arthritis. Frequently consumed as a tea, it is sometimes called the original herbal aspirin. Native Americans have used willow bark for hundreds, perhaps thousands of years as a natural pain reliever. Willow bark contains acetylsalicylic acid, known to us as simply”aspirin.” Since some people are allergic to aspirin, you should consult your physician before using willow bark.

One of the most common herbs on the planet. Used worldwide for the treatment of minor burns and wounds, aloe vera can also be used topically on sore joints. Some gels sold in health food stores use the entire plant, not simply the gel. Both can provide relief, so try using the gel from freshly cut leaves, then either grind up the entire leaf and try that method, or you can purchase pre-made products.

One three month study showed that subjects who were given 250mg of ginger extract 4 times each day had considerable reduction in inflammation and knee pain. Another study showed that 28 subjects with rheumatoid arthritis and 18 subjects with osteoarthritis who were given 3 to 7 grams of ginger daily had a 75 percent reduction in their pain and swelling. These effects continued during the entire 2 year study and there were no reported side effects. Ginger can be consumed as a supplement, added to foods, drank as a tea, or even applied as a compress. 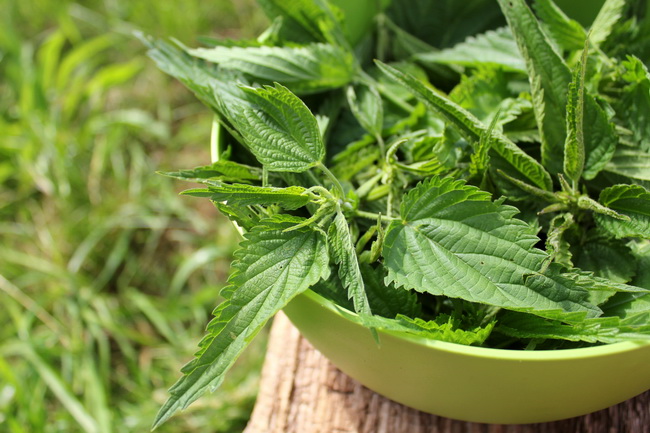 Found in abundant quantities in South Africa, this herb has been used for centuries in traditional medicine for the treatment of arthritis like conditions. One species of Devil’s Claw, uncaria guianensis, has been shown to help those with osteoarthritis, while another species, uncaria tomentosa, is shown to be effective for those with rheumatoid arthritis. The active ingredient in this plant is found in its secondary root which contains highly anti-inflammatory compounds. In one study, which was published in Rheumatology Journal, found that devil’s claw extract was just as effective as the prescription drugs Celebrex or Vioxx.

Stinging nettle is one of the most popular and potent herbal home remedies for arthritis. It has been used to treat numerous ailments, including gout, urinary tract infections, insect bites, tendonitis, sore muscles, joint pain, and arthritis. Studies show that a topical application of nettle leaf on the affected areas can significantly reduce the intensity of pain. The fine hairs on this plant release irritating chemicals when touched but at the same time, these nettles reduce the amount of inflammatory compounds in the body and interfere with pain signals. Dendritic cells play a big part in the development of rheumatoid arthritis. Studies have shown that consuming nettle extract can inhibit the growth of these cells, although it won’t kill them entirely.

Originally used as a laxative, scientists have found much better uses for these seeds. This herb has some potent substances and nutrients that can really help to fight arthritis. These seeds are super rich in a substance called ALA, or alpha-linolenic acid, a special type of omega-3 fatty acid that is very effective when it comes to fighting inflammatory diseases such as arthritis. More than 57 percent of the omega-3 fatty acids found in flaxseed are ALA. The body then converts ALA into PA, then DHA, which makes a type of anti-inflammatory fat. In one study, subjects who ate flaxseeds during a one month study had significantly reduced levels of inflammation.

The capsaicin content in this herb is known to be an effective and powerful pain inhibitor as well as inflammation reducer. Cayenne can reduce the pain associated with osteoarthritis in studies. It can also help to ease the symptoms of arthritis such as swelling, stiffness of the joint, and loss of joint function. Cayenne works by reducing the concentration of a compound that the nerve cells use to transmit pain signals to the brain. This herb is also rich in salicylates, which give it its powerful analgesic effects.

Most people think of dandelion as either a weed or a food, but it also has medicinal properties which are very helpful to those with arthritis. This herb has some nutritional value, including vitamins C, B, D, and A, along with iron and potassium. Dandelion also has anti-inflammatory compounds that make it effective in fighting the pain that comes with arthritis. Researchers believe that dandelion can flush toxins from the body which cause joints and muscles to become inflamed. Dandelion also reduces uric acid in the body, which can lead to pain and joint stiffness if left untreated.

The use of herbal medicines and treatments has exploded in the past 10 years. This means that many conventional doctors are more willing to assess and consider these treatments than they might have been in the past. When it comes to arthritis, some of these herbs are terrific compliments to current medications that you might be taking. However, that being said, some of these herbs can interfere with certain medications or even cause serious side effects or interactions. Always consult with your doctor and never stop taking prescription medications without speaking to your doctor first. You should also talk to your physician before you begin any herbal medication or treatment.