Cranberries Season: 5 Reasons To Incorporate This Berry Into Your Meals 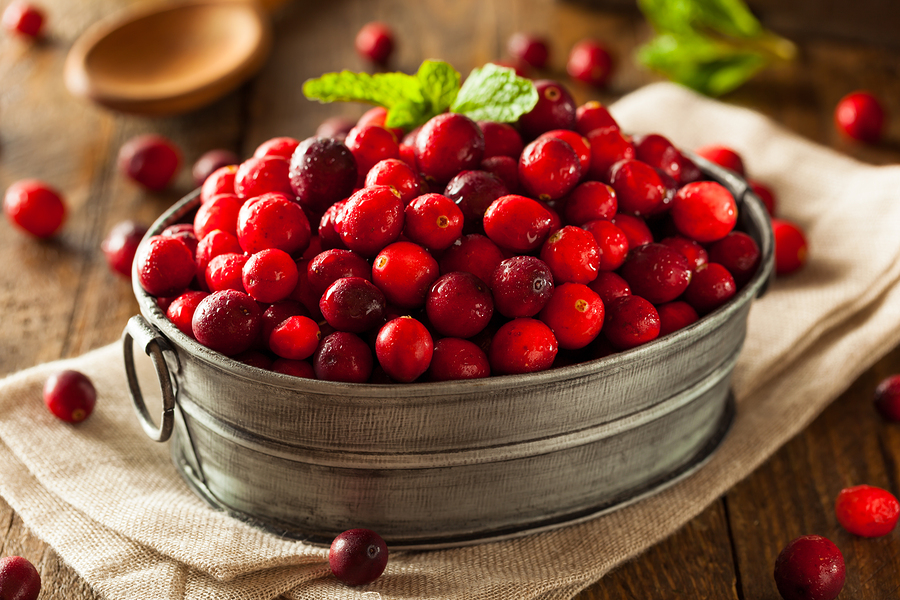 As the holidays roll around, cranberries suddenly become a staple in everyone’s pantry. Cranberries usually reach their peak season from September to November which explains why they are part of the season’s foods but they shouldn’t be relegated to just two months of the year. South of the equator, cranberries are harvested from March to May so, if you wanted, you could find fresh cranberries from March all the way to November.

Cranberries originally grew wild in the United States and early settlers named the berry because the vines and berries reminded them of the crane’s beak. Cranberries are grow in bogs which is dry land with lots of drainage ditches crisscrossing them. When they are harvested, they can be dry or wet harvested. Wet harvesting is usually easier on the berries and the grower and is thus the more common method – leading to the crimson seas of cranberries that have made many a picture extraordinary.

The little berry does more than add a tang of sourness to dishes too. Lauded for its antioxidant benefits, cranberries have also been known to be helpful in urinary ailments and with water retention in the body. Here are five reasons why cranberries should be a staple in your pantry all year round instead of just around the holidays.

Cranberries outrank nearly every fruit in their antioxidant capacity per cup. One cup of whole cranberries has a 8,983 antioxidant capacity. Only blueberries have a greater capacity, at 9,019 for cultivated varieties. Antioxidants have a variety of functions in the body and are especially necessary once the body starts to age. Your body produces some antioxidants but the process slows down as you age. Also, if you regularly consume heavily processed foods, are overexposed to sunlight, and drink alcohol then the amount of antioxidants produced by your body won’t be enough to stop or render harmless the free radicals in the body.

Much research has gone into the study of using cranberries for urinary tract infections. Today, it is actually prescribed for those with the condition as a dietary supplement. Cranberries are very effective at helping to treat and even prevent the reoccurrence of UTI’s because of a particular antioxidant called proanthocyanidins, or PACs for short. PACs work by preventing bacteria from sticking to the urinary tract wall and thus those that are prone to infection can hope to avoid it.

Although it is now widely prescribed, the evidence is still mixed as to if cranberries really do help. A study in 2016 that lasted a whole year took a look at 147 women in nursing homes and had them take two capsules of cranberry a day. The study found that while the levels of bacteria were reduced in the first six months for those taking the cranberry capsules, the occurrence of UTI’s did not change significantly from the control group taking a placebo.

Cranberries are packed with fiber which has been shown to help with digestion. In just one cup of cranberries, there is 4.6 grams of fiber. The amount of fiber means that when eaten as a snack, it will help you stay full longer. Also, cranberries have a minimal amount of sugar, and while this makes them tart, it also makes them better for you. Less sugar means that you’re not going to have a sugar rush and drop in your blood and the combination of that with the fiber means that cranberries are an excellent snack for keeping you full and your blood sugar steady.

Although more studies need to conducted to know for sure, preliminary research has shown that cranberry juice might be quite effective at helping cholesterol levels. Regular consumption of the juice can help to reduce LDL cholesterol levels as well as triglycerides. There is one thing to be weary of though – since cranberries are quite tart, many juices have added sugar. Stay away from those varieties as the added sugar actually will create the opposite effect of what you want when drinking the cranberry juice.

Most people are aware that Vitamin C is an essential vitamin when it comes to keeping their immune system in top gear. But while the majority reach for the orange juice, cranberry juice might actually be a better option. Just one cup of cranberry juice has 22% of the recommended daily value of Vitamin C and can be quite the fighter against those pesky colds. As above, make sure you buy the no-sugar added cranberry juice as sugar has actually been shown to destabilize the immune system and make it vulnerable to attacks. A cup or two a day, along with plenty of sleep, exercise and other healthy foods will help you get through the cold season with relative ease.

Cranberries are often forgotten by most throughout the year and only remembered for a few weeks throughout the holiday season. But cranberries deserve much more time than that in the spotlight. Not only are they harvested around the world from March to November, and thus can be found fresh, but they are also quite the powerhouse berry when it comes to benefiting your body. Cranberries are particularly good at providing antioxidants, being the best fruit, only behind blueberries, at antioxidant capacity. The little crimson berry is also useful for urinary tract infections, digestion issues, in aid against cholesterol and for immune system support. So when you start adding this berry to your pantry this winter, make a mental note to keep it around all year long because it has plenty of benefits for you.