Email
Home   >   Health News   >   Energy Drinks: Beyond Dangerous, They Can Be Deadly!

Energy Drinks: Beyond Dangerous, They Can Be Deadly!

Energy drinks: they are all around us. They give us wings, turn us into rock stars and monsters, but are they dangerous? Health experts everywhere say: YES!

It’s more than just the sugar or aspartame. In fact, a recent story out of England states that one bodybuilder, who drank 7 to 8 energy drinks each day, recently died of liver failure at the ripe old age of 39.

Dean Wharmby’s doctors found a very large tumor on his liver in 2010. He immediately changed his diet, refused surgery or radiation treatments, cut red meat and sugar out of his diet and took mega doses of vitamins, but doctors say it was too late.

Although no one knows for certain, his father is saying that he thought the energy drinks played at least a part in his son’s death. Most liver diseases are due to toxins or alcoholism, but fatty foods and high amounts of sugar can cause a condition known as non-alcoholic steotohepatitis. This leads to liver cancer and liver failure. Researchers and top scientists believe that sugar molecules, including the ones found in meat products, can possibly trigger an immune response that leads to inflammation of the liver, eventually resulting in liver cancer or tumors on the liver.

Energy drinks have been linked to as many as 184,000 deaths around the world in the past 5 years. If that doesn’t sound like much to you, consider this: these are only the deaths that are believed to have been related to energy drinks. Think about all the people who could have died from these caffeinated drinks and no one suspected. Or how many people are made sick by them, but no one has made the connection.

If you didn’t hear about this man’s death through the mainstream media, don’t be too surprised. Mainstream media is loath to pin the blame on products that their network might be running commercials for. They will tell you that there is no connection between cancer and sugar, but the truth is we do know that there is a link! There are numerous studies proving this fact over and over again.

One study, which was published in the 2010 journal Cancer Research, found that cancer cells easily metabolized high fructose corn syrup to increase their levels of proliferation. The authors of this study found that not only does sugar feed cancer cells, but that these cells used it for cell division, increasing the rate at which cancer grows and spreads.

If you think about it, processed sugar is completely unnecessary in a person’s diet. Humans have lived for millions of years without it, so why do we feel we need to consume it now? Not only consume it, but consume it in large quantities? 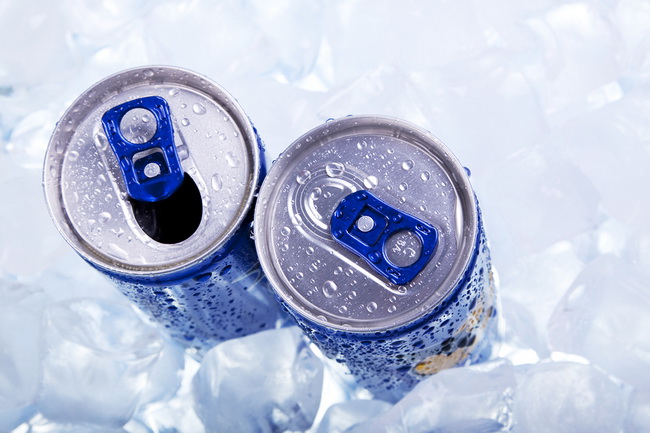 Energy drinks in particular are making combinations of sugar and caffeine in such high quantities that it is causing people health problems. An average 500ml can have as much as 160mgs of caffeine. This is the equivalent of 4 cans of soda. It can also contain as much as 13 teaspoons of sugar. Pour thirteen teaspoons of sugar in a glass to get an idea about how much that is. You will be shocked by the sight of it.

Some retailers have placed a voluntary ban on the sale of these drinks to children under the age of 16, but there is no actual law preventing it. One government advisor warned that energy drinks were just another type of drug.

One celebrity mother would agree. X-Factor judge Sharon Osbourne said that she placed the blame for her daughter’s recent seizure directly on energy drinks. Kelly Osbourne spent 5 days in the hospital after having a seizure and collapsing.

Teachers across the country are telling us that children who drink these popular drinks report feeling sick, dizzy, and shaky and exhibit hyperactive behavior. Some children are reportedly bringing them to school and consuming two or three of them during a typical school day.

The British Soft Drinks Association states that energy drinks should not be sold in schools, but surveys have found that many school sell energy drinks.

Sugar-free energy drinks are no better. They still contain high levels of caffeine, and aspartame is hardly considered to be a healthy alternative to sugar.

Don’t be fooled by cool and clever marketing ploys designed to make youngsters think that these are harmless ways to stay jolted. Explain the dangers of these drinks to your youngsters and avoid energy drinks. They don’t contain anything that the human body needs.

Related Posts
be awarecancerdrink
Help Us Spread The Word!
Like Us On Facebook To Stay Updated!
I'm already a Naturalon fan, don't show this box again.