Garlic vs. Antibiotics: Which Comes Out On Top? 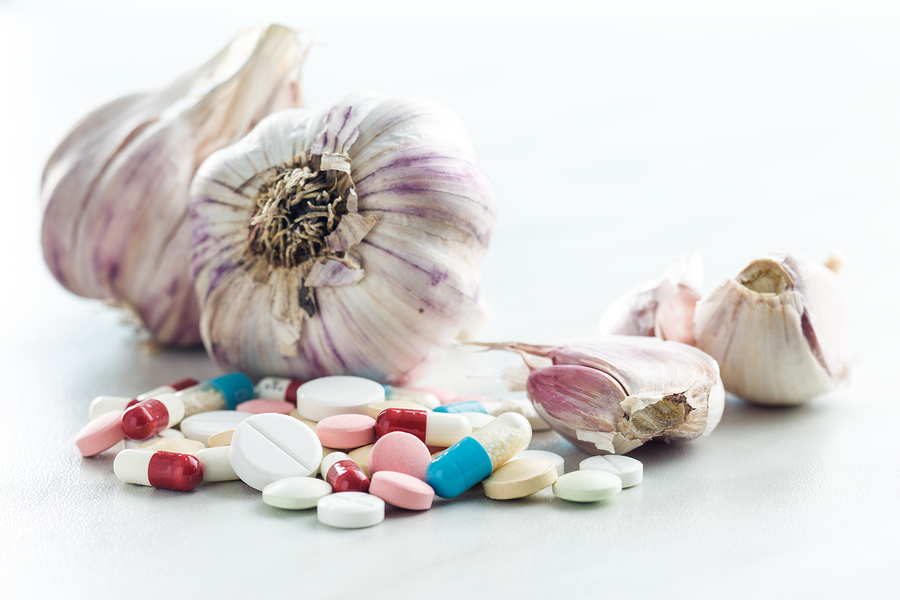 The invention of penicillin in the early 20th century represented a quantum leap forward for modern medicine. Suddenly, bacterial infections that had plagued mankind since the dawn of history were treatable. As the use of this new class of drugs called “antibiotics” became more widespread, traditional medicines and food-based medicines fell out of favor, and some were even dismissed as quackery.

But this came at a price. Antibiotics are powerful drugs, but they have two major disadvantages. First, using an antibiotic is somewhat like the military striking a city with a nuclear weapon because one building is occupied by the enemy. Yes, the enemy was eliminated … but the entire city was destroyed along with it. Antibiotics do not distinguish between bad bacteria that cause disease, and good bacteria that are supposed to be in your body. Many people end up unwittingly destroying their own gut biome and negatively affecting their health in the long run because of an antibiotic regimen.

The second major weakness of antibiotics is the fact that no matter how powerful the drug may be, there was always a small percentage of harmful bacteria that survived. Through the process of natural selection, these bacteria passed on their traits to future generations. Over the decades, this had led to the development of antibiotic-resistant strains of bacteria. These “super-bugs” have led to new forms of disease that cannot be treated with conventional medicine. The overuse of antibiotics has exacerbated the very problem they once solved. It was this process that birthed MRSA, or treatment-resistant staph infection, among other new diseases.

This development has led some open-minded doctors to experiment with traditional, food-based remedies to see if they can offer a way out of this potentially disastrous situation. This article will focus on the promise that garlic holds for fighting harmful bacteria.