What is the Difference between Table Salt, Kosher salt, Sea Salt, and Himalayan Salt?

Lately it seems as if there has been quite a bit of talk about salt and all the different types that are currently available. Let’s face it, without salt; most meals would be terribly bland. Having said that, it seems as if not all salt is created equal. You might be saying out loud about now “Salt is salt, what’s the difference?”   Let’s take a look at that because there are so many different varieties.

Salt really isn’t all the same! Not only do they differ in texture and taste, but they also have different mineral and sodium content. 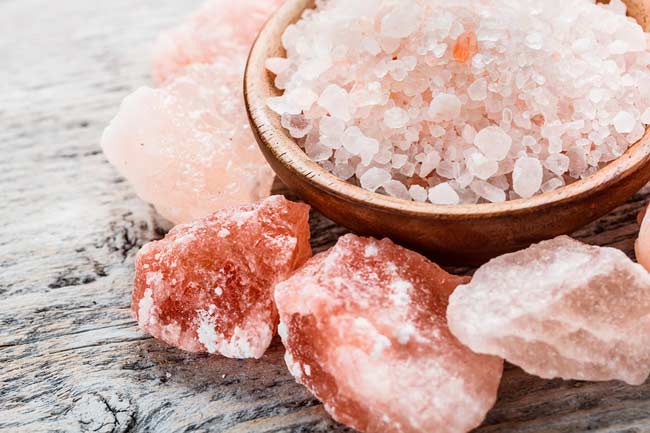 Salt is a crystalline mineral that is made of two compounds, chlorine (Cl) and, of course, sodium (Na) Salt is an essential mineral to every living thing, both animals and human beings. Almost all salt is taken either from salt mines, or by evaporating sea water, or other types of mineral rich waters, and extracting the salt.

Although salt has numerous purposes it’s mostly used for the seasoning of food. It is also used as a means to preserve food because bacteria have a very hard time growing in salt. Eaten in large amounts, salt can be dangerous to your health as it binds with water in the blood and thereby raises blood pressure.

Let’s take a look at the most common types of salt available.

This is the most common type of salt around. You find this in grocery stores, in restaurants, those little packages in fast foods joints, and, well, just about everywhere. Many people wind up getting too much of this type of salt via the consumption of processed foods. This salt is different from sea salt because it needs to be processed and often times, other ingredients are added to it, such as anti-clumping agents (which contain high levels of aluminum), and usually some sort of sugar is added to help cut the very bitter taste of the aluminum.

Also, many table salts are sold with iodine, to help prevent Americans from becoming iodine deficient. There are estimates that perhaps as many as 2 billion people globally do not get sufficient amount of iodine, which leads to mental deficiencies. You can get iodine from eating fruits and veggies that have been grown in iodine rich soils, or eating sea vegetables but for most people, they don’t want to take risks with their health, so they buy iodine enriched table salt.

This salt is naturally produced by simply evaporating water from the ocean. This is often done in man-made pools located near the shore. The sun and wind does most of the work, evaporating the water, so that the sea salt is what remains behind. Sea salt has as much as 80 different trace minerals. Also, this salt does not have anti-clumping agents added to it so you might find that, if you try to use it in your table salt shaker, it’s going to clump up and clog it. You can always forgo the shaker and just place some in a small sealed container for use. It’s good to note that sea salt also has a small amount of iodine that occurs naturally, so there is no need to add it.

Sometimes this is simply called Himalayan salt. This comes from Pakistan, from the ancient deposits of sea salt. This salt is very rich in minerals as well trace elements. It can vary in color from white to red to various shades of pink. The Himalayan Pink salt is believed to be the purest form of salt available. Read why it is considered one of the healthiest foods.

This salt was used, originally, for religious purposes. Jewish law required that blood be removed from meat before it could be eaten. Kosher salt has a very coarse, flaky texture that is very god at removing blood. The principle difference between kosher salt and regular table salt is the size of the compound. Kosher salt is similar to large flakes, so it’s very easy to pick up with your fingers and spread it over food. When dissolved into food, there really is no difference to the taste when compared to regular table salt. You should note, however, that kosher salt will not contain any anti-clumping agents nor will it contain any iodine.

The bottom line is our bodies truly need very small amounts of salt to function. So if you are going to add salt to your diet, either sea salt or Himalayan Pink salt are obvious the most beneficial choices as they have no additives and they have natural minerals that the body can use.

Use these healthy salts sparingly and enjoy the flavor of your favorite foods!

Related Posts
be awarenatural remediesnutrition
Help Us Spread The Word!
Like Us On Facebook To Stay Updated!
I'm already a Naturalon fan, don't show this box again.