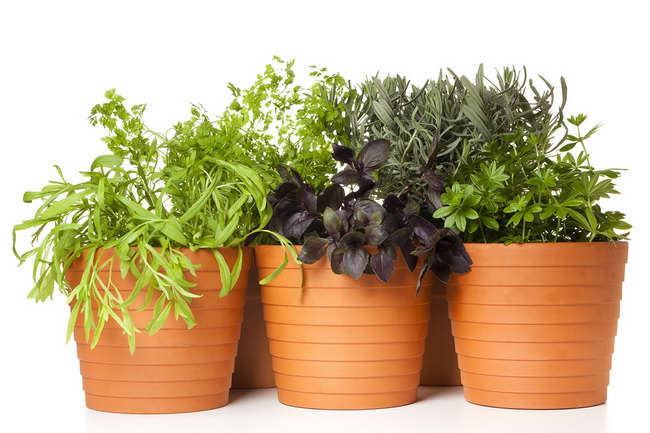 Although mainstream media virtually ignores herbs and other natural treatments for any medical condition, the World Health Organization says that about 80 percent of the world population uses medicinal plants to treat all kinds of health problems, including skin problems such as eczema. Many pharmaceutical companies use various herbs as a base for their drugs, even though they won’t tell you that.

Eczema is an inflammatory disease of the skin that is often found on the scalp, neck, wrists, elbows, and knees, but it can occur anywhere on the body. Eczema can be identified by its extremely dry patches of itchy, crusty skin. In extreme cases, eczema can even bleed or ooze a watery discharge. In addition to the itchy skin some people say that they feel a stinging or pins and needles type of sensation or that the area breaks out in pimples.

Although the exact cause of eczema is unknown some people believe that it results from an allergic reaction. Although there are some over the counter remedies that are designed to help ease the symptoms, they can be filled with toxic chemicals and be quite expensive.

Many people find relief from their eczema through herbs from Mother Nature. The following list of herbs has been proven to offer effective relief from the pain and itching.

Sometimes referred to as marigold, calendula is super effective when it comes to fighting dermatitis or eczema. You can find creams and ointments that contain calendula in many drug stores or natural remedies stores. Alternately, you can also apply moistened calendula tea bags to the affected area or, remove the leaves from the tea bags and apply it directly to the affected area and put a bandage or dressing over the moist leaves to hold them in place.

Actually, this isn’t a single herb but a combination of 5 herbs in a capsule form. Researchers have created this formula which contains the root bark of peony trees, Japanese honeysuckle, peppermint, the root of atractylodes herb as well as bark from the Amur cork tree. In a 2007 study done in China found that subjects who took pentaherb had a reduced need for conventional products such as steroid creams and generally had an improved quality of life. Why these herbs? Evidence suggests that all of these herbs contain anti-inflammatory compounds which help to reduce eczema.

You might think witch hazel is only for acne or for use as an astringent, but witch hazel has numerous benefits for the skin besides stopping pimples. Recent studies show that this old fashioned remedy works just as well as other treatments for eczema. One study involved 22 subjects with eczema. On one arm, subjects used a standardized witch hazel salve and a non-steroidal anti-inflammatory cream on the other. After 3 weeks, researchers found that both arms had improvements in redness, itching, and scaling. Studies like these show that this age-old remedy works as effectively as many pharmaceuticals.

The leaves from the burdock plant have been found to help stop the scaling that it often found in those with eczema. Some say that burdock seeds work better than the leaves. If you should decide to use the seeds, mix them with some crushed garlic and glycerin for best results. Many people drink burdock root tea as a means of cleansing the blood. Scientists have found that burdock root not only detoxifies the blood, but improves blood circulation to the surface of the skin as well, which can improve the texture and quality of the skin. Burdock root also has antibiotic and antioxidant compounds. You might want to try making a poultice out of the leaves or seeds, and then drinking a few cups of burdock root tea for optimal results.

This is another herb that is often used for another purpose, in this case for depression, but often helps in other areas. When used topically, St. John’s Wort is an effective remedy for eczema. Researchers in one study compared a cream that had St. John’s Wort extract to a placebo cream that did not contain any herbal ingredients in 21 subjects who had mild to moderate eczema. The participants were told to put the cream on one part of the body that had eczema, and the St. John’s Wort cream on another part of the body that also had eczema. Some people saw a small amount of improvement with the placebo, but the cream that contained St. John’s Wort far exceeded the results achieved with the placebo. 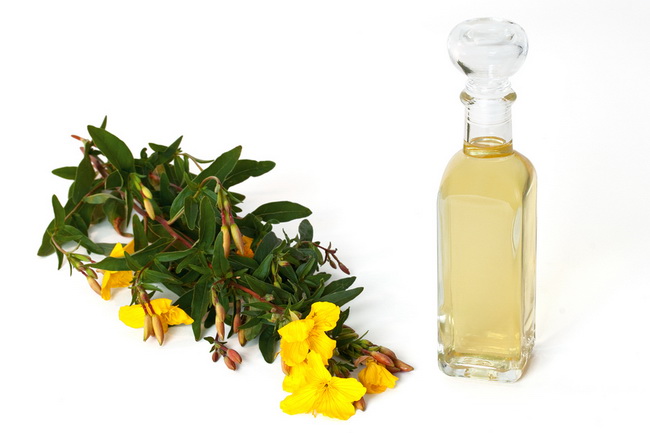 As far back as 1989, evening primrose oil has shown to be effective in alleviating the symptoms of eczema. In a meta-analysis of randomized, double blind, placebo-controlled trials showed that this oil had significant effects for those who suffer from this skin disorder. In a recent testing and re-analysis of more than 25 clinical studies that included more than 1200 patients confirmed again that this herb had very beneficial effects on the crusting, itching, edema, and redness.

All subjects showed improvement within 4 to 8 weeks after treatment. Try applying ointments that contain primrose oil, or squeeze out the oil from primrose capsules, and apply it liberally to the affected areas throughout the day, before going to bed, and after bathing.

German chamomile is perhaps one of the most overlooked herbs for relief from eczema. Back in the early 1980’s, a survey of 2,500 doctors who prescribed a chamomile based cream for their patients with eczema reported that 95 percent of those patients had good results and all of them tolerated the cream well with no side effects noted. Chamomile decreased inflammation levels, which led to reduction in the level of topical steroids that were needed to control symptoms.

Another study involved 161 patients who had eczema on their forearms, hands, and lower legs. Researchers studied the effects of a chamomile based cream versus other steroidal and non-steroidal skin products over a period of 4 weeks. Chamomile showed that it offered similar results as hydrocortisone. In fact, chamomile cream worked far better than the non-steroidal anti-inflammatory cream or the steroid preparation.

Centella asiatica is an important medicinal herb that is sometimes referred to as “the herbal cure-all.” Various clinical trials showed that this plant not only heals wounds, but that it can treat various other skin problems such as varicose ulcers, psoriasis, leprosy, and eczema. The saponins and triterpenoids in centella are the active ingredients that have an almost miraculous effect on those with skin problems.

Sometimes called lady’s slipper, spotted touch me not, or lady’s eardrops, the juice of the jewel weed is often used in the treatment of different kinds of skin problems such as ringworm, athlete’s foot, poison ivy, and eczema. Crush the leaves of this plant and apply them to the affected area to stop the itching that eczema sufferers deal with.

The extract from the roots of the licorice plant have been known for quite some time as an effective means of fighting eczema. Some studies have shown that a topical application of licorice extract on skin problems such as eczema, cysts, and pruritus have reduced itching, edema, and erythema after only 2 weeks. 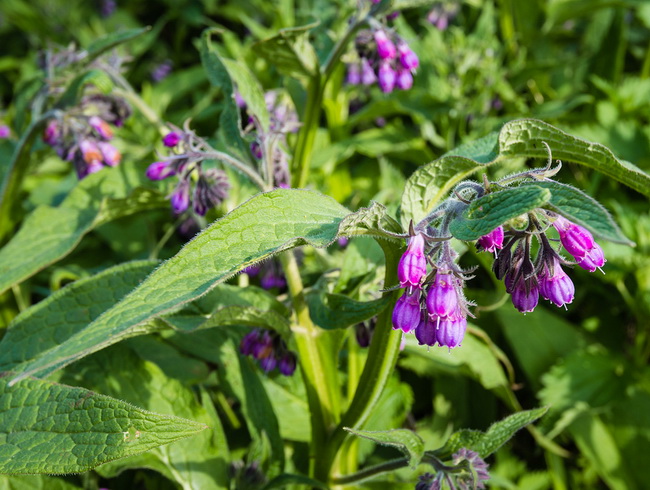 This herb is well-known for its healing properties and the roots from comfrey are especially effective for those fighting eczema. The active ingredient in comfrey is called allantoin, which is known for its ability to greatly accelerating skin or wound healing. Applied directly on the skin, comfrey leaves can prevent infection and minimize scarring. Allantoin is known to be an effective way to keep the skin surface soft and smooth.

Comfrey also contains large amounts of vitamin A, which is also known to help relieve the symptoms of eczema, such as the dryness and itchiness. Chop up comfrey leaves and mix them with some olive oil. Apply this mixture to the affected areas twice each day.

Sometimes called Indian Pennywort, gotu kola is well-known for its anti-inflammatory, antioxidant, and diuretic compounds. This makes gotu kola an excellent herb for fighting eczema. Long used by Indian, Asian, and Chinese cultures for treating various skin problems, gotu kola leaves are boiled in a small amount of water until the water level is reduced by half.  Drain to remove the leaves, add some sweet almond oil to the infused water and allow to cool. Apply this oil to the affected area for super eczema relief. Gotu kola also contains triterpenoids, which increase the flow of blood to the skin surface, which helps wounds to heal faster as well as strengthening the skin.

Copaiba balsam is a wonderful herb that is super effective when treating skin problems. This herb contains disinfectant, anti-fungal, analgesic, diuretic, anti-inflammatory, antibacterial, antiseptic, and germicidal compounds. Native to Brazil, copaiba balsam is a yellowish brown color and has a pleasant, earthy type of smell. This herb has been used for thousands of year for the treatment of psoriasis, eczema, tetanus, and infections.

Cleavers goes by several other names including sweet woodruff, catch weed, or goose grass. Cleavers is a terrific herb for eczema. Making a strong tea out of cleavers, you can use it to wash the skin to help heal wounds and improve the overall skin tone. Researchers say that cleavers can remove waste and toxic substances from the body and this appears to help those who suffer from eczema. Using the tea as a skin wash can help relieve the symptoms of eczema such as dryness, itchiness, cracked skin, and blisters.

Although there have been no clinical studies done on the use of oatmeal, generations of clinical experience will testify to the soothing effect this has on the skin. Simply put, about 8 ounces (1 cup) of oatmeal in a coarse cloth bag and tie it closed. Place the bag under the running water in the tub. The water will look a bit milky or opaque but that’s normal. Once the tub is full, place the bag in the water while you soak. Soaking in this oatmeal infused water for at least 20 minutes will go a long way towards relieving the symptoms of eczema.

Extra Tip: Sometimes, conventional dairy products cause eczema to flare up. Try cutting back on dairy products and eat more organic fruits and vegetables. You might also want to include more ginger, turmeric, and other anti-inflammatory herbs and foods to help heal your eczema from the inside out.

Always consult your physician before consuming any herbal products, especially if you are taking prescription drugs or if you are pregnant.