5 Reasons RoundUp Should be Banned Forever

There is no denying it; the science on this is irrefutable: RoundUp, a weed killer manufactured by Monsanto, is the deadly chemical that just keeps on giving. It poisons the foods that are consumed by millions of people every day. For the sake of the environment and all of humanity, RoundUp should be banned forever.

Yes, these are very strong, powerful words, but they need to be said and they are fully substantiated in study after study. Rodale News recently published five distressing things everyone should know about RoundUp. It needs to be placed in the “dangerous chemicals used in the past” list, not in the produce bin at your supermarket. RoundUp does NOT biodegrade as Monsanto says. It’s not harmless. Its killing animals, the soil, and, eventually, mankind. 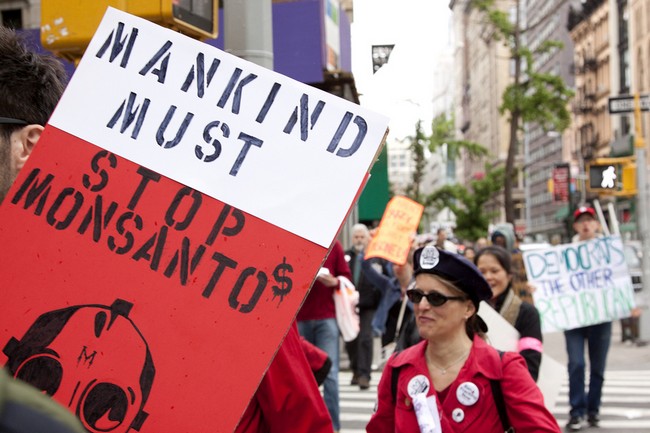 In 2013, researchers in Argentina discovered that RoundUp caused serious birth defects in animal tests. One of the researchers, Andres Carrasco, stated that the findings in the lab were comparable to malformations in women who were pregnant when exposed to glyphosate.

Also, scientists found those who consumed GMO corn had serious organ damage. This study, done in 2009, was based on Monsanto’s own trial data! This type of negative data and reporting is the likely explanation as to why Monsanto and other biotech companies block independent research if they can.

Even the EPA is doing a registration review of RoundUp. The EPA is “rounding up” data on glyphosate through 2012 and they will make their report sometime in 2015. Let’s all hope the EPA cannot be bought off by Monsanto, as they have the power to ban Roundup.

Check out the top 5 reasons why RoundUp should be banned forever.

1. Being exposed to RoundUp Doubles Your Risk of Lymphoma

As of right now, the government says the same thing that Monsanto does; that glyphosate is basically an inert ingredient and there is no need to be concerned. Even though a review of more than 44 scientific studies have proved otherwise. These studies all state that exposure to RoundUp more than doubles a person’s risk of developing non-Hodgkin’s lymphoma.

Researchers found that RoundUp interrupts the normal function of white blood cells, which causes extreme damage to your immune system. Read more about common foods that food experts won’t eat but you do everyday.

When we say everywhere, we mean it! RoundUp is now found in the dirt, air, and rainwater. You might be able to justify the use of RoundUp if it were simply found in areas where crops are grown, but that simply isn’t happening. Scientists are now finding that this deadly chemical has spread to the air, and is found in rainwater. Imagine that, RoundUp raining down on your head and your children’s heads and playgrounds, and schools. Glyphosate is now traveling on the wind, folks. Be very afraid. Find out myths GMO companies want us to believe.

Although Monsanto says RoundUp simply washes off crops after they have been sprayed but this is not true. Norway did a study that found that glyphosate accumulates inside the food crops at very high levels.

The Journal of Food Chemistry published research in June that stated that while crops labeled as RoundUp Ready have the capability of resisting glyphosate and surviving just fine, they instead, absorb and incorporate this chemical into the food source. This means that anyone eating GM corn or soy or any of the products that are made from it, such as soy protein, are eating RoundUp. Food for thought, isn’t it?

One might consider looking the other way if RoundUp was actually helping increase crop yields and producing more food for the world’s population, but this isn’t the case. Bees, butterflies, and other important pollinators of food sources are killed by this “herbicide”.

The use of RoundUp has resulted in the reduction of monarch butterflies by as much as 81 percent. This is due to the fact that RoundUp kills milkweed plants which is necessary to the reproduction of this species. Like bees, butterflies are crop pollinators, without these vital insects, many fruit and seed trees, as well as other plants, will not be able to reproduce and can be wiped out. This is confirmed in a study done at Iowa State University.

5. RoundUp doesn’t even work as it should

To top it all off, RoundUp doesn’t even work as advertised. Overuse of this product has now lead to the development of highly resistant “super-weeds”. These weeds cannot be killed with chemical treatments and now cover millions of acres of land in the US.

Because of this fact, the EPA is considering approving an herbicide that is even more deadly than RoundUp. This is made from a component of Agent Orange. Yes, Agent Orange, the same chemical Monsanto used for defoliation during the Vietnam War. Thousands of our veterans suffer long term and disabling physical problems due to Agent Orange. Does it really sound like a good idea to begin using this deadly chemical on our food sources here in the USA? It seriously makes one wonder what the connection is between Monsanto and the US government.