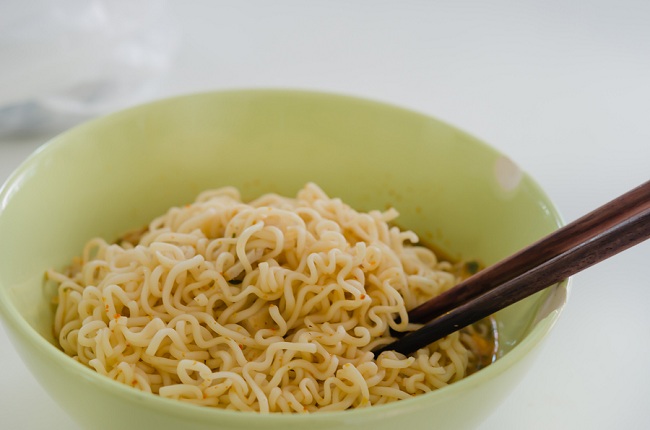 If you go look in your kitchen or panty right now, you probably have some of those instant Ramen noodles sitting there, looking completely harmless. You might think that they are pretty harmless — a quick and cheap meal when time or money is short, and you would be right about that. But did you know that Ramen noodles (sometimes called Cup-O-Noodles) are associated with an increased risk of several health problems?

There are a whole lot of things you didn’t know about this college dorm food staple. We are about to fill you in on everything you need to know (or ever wanted to know) about those Ramen noodle squares.

Did you know that the first noodles consumed in outer space were Ramen noodles? The creator of these instant noodles, Momofuku Ando, wanted to make instant noodles portable and easy to eat. What better way to prove that than to make them astronaut food? In 2005, Ando created “Space Ram,” which is a vacuum packed type of Ramen noodles that uses smaller noodles so that they cook without boiling water. He also added a thicker broth to prevent them from flying around the cockpit. Japanese astronaut Soichi Noguchi’s trip in the Discovery space shuttle proved that even rocket men like Ramen instant noodles.

Baylor University found that for those who eat a lot of these instant noodles, the risk of developing metabolic disease, which increases the risk of stroke, diabetes, and heart disease, goes way up. South Koreans eat a whole lot of these Ramen noodles because they are cheap. They eat more instant noodles than anyone else in the world, with more than three billion packages sold there in 2010 alone.

South Korean health problems have increased steadily as their consumption of Ramen noodles has increased. The general population has gained more weight (on average) and has much higher rates of heart disease now than at any time in their history.  Researchers looked at national health and nutrition surveys between the years of 2007 and 2009. These surveys involved more than 10,000 South Korean adults between the ages of 19 and 64. Scientists found that subjects who said that they ate instant noodles more than twice each week tended to suffer from metabolic syndrome more than those who ate instant noodles once a week or less.

It’s one of the reasons that people eat Ramen noodles — they are super cheap (find out super cheap but super healthy foods). Depending on where you shop, you can find the instant Cup-O-Noodles for about 25 cents and a block package of Ramen noodles for 15 to 20 cents! When you are on a tight budget, these can go a long way towards stretching your food dollar. In fact, if you ate only Ramen noodles for every meal, it would cost you a mere $140 dollars over a year period. When you consider that most Americans spend more than $7,000 each year on food, you can see where these can save you some serious bucks. But exactly how much is your good health worth?