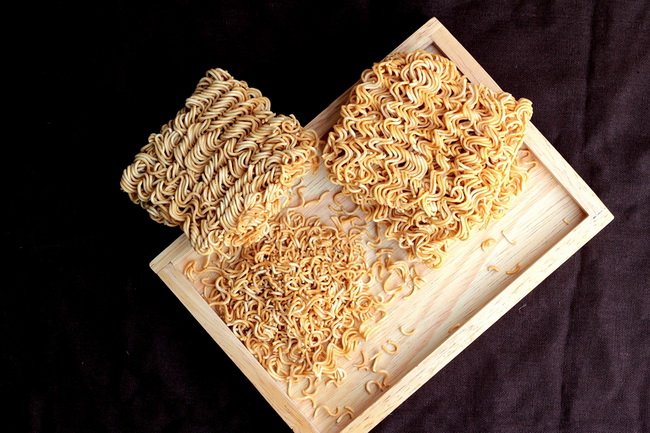 Today, Ramen noodles are the bargain basement when it comes to food, but it wasn’t always that way. The inventor of Ramen noodles, Momofuku Ando, first made “Chicken Ramen” back in 1958, when food was scarce after WWII. He wanted to make something easy to make that was also portable. However, when it hit the Japanese supermarkets, it was seen as a luxury item since you could buy fresh Udon noodles for about a sixth of the price of Chicken Ramen.

They are definitely cheap, they are definitely popular, but they are also definitely unhealthy. Some researchers have gone as far as to call Ramen noodles “death in a cup” or “death in a cube-shaped bag.” If you eat a great deal of Ramen noodles, your risk of developing heart disease, diabetes, stroke, heart disease, and high blood pressure goes up considerably. The noodles have a high glycemic index, like most white flour based foods, which increases your risk of diabetes. The little flavoring packet contains sugar, tons of salt, and MSG — all of which spell trouble for your health.

6. It’s The Best-Selling Item In Some Jails

Rikers Island in New York says that they know they need to keep those Cup-O-Noodles on hand in the commissary. It’s their biggest selling item at a whopping 35 cents. Guards give inmates hot water to cook the noodles, and some inmates simply give away the noodles but save the flavor packet to season their otherwise bland prison food.

7.   Even The Packaging Is Unhealthy!

If you thought the high glycemic noodles and MSG laced seasoning was bad enough, consider this: The Styrofoam cups in those Cup –O-Noodles are loaded with BPA, a known carcinogen and hormone disruptor.  The block of instant noodles in a bag might not contain BPA, but they simply put produce plastic that the world will have to find a way to dispose of sooner or later. Keep in mind that plastic never biodegrades. Never.