Is Your Garden Hose Contaminating Your Food?

Many of us have pleasant memories of playing outside with the garden hose on those hot summer days when we were children. Do you remember days like that? Well, the good old days are long over, friends, and it’s now very important that we avoid drinking out of our garden hose. Also, don’t allow your children to do so either! In fact, it’s even questionable whether or not you want Fido drinking from it either!

Take a quick look the next time you go to your local home improvement store or garden center and read the warning label on those hoses. They advise you to not drink out of the hoses that are for sale. Why is that? Since garden hoses are not meant to be used as sources of drinking water for humans, there are absolutely no regulations as to the types of chemicals or materials they are can be made of! Garden hoses are not regulated in way by the Safe Drinking Water Act, because they are not designed for drinking out of, simply for watering plants and washing cars. 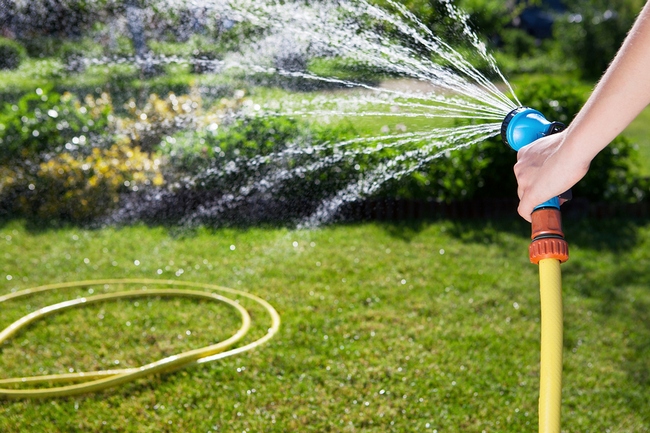 Do You Know What’s in Your Garden Hose?

Most of us would never think to look at the material our garden hoses are made of. But, as you might now suspect, most garden hoses are certainly not made from natural materials. They are actually constructed of toxic chemicals that not only can interrupt your hormones, but may harm you in more ways than you can imagine.

A non-profit research group called The Ecology Center conducted tests on 21 garden hoses of all types that were bought from popular home improvement and department stores for various chemicals such as flame retardants, chlorine, PVC, cadmium, and lead.

More than one third of the hoses tested had very high levels of one, and sometimes more, chemicals that should cause everyone concern. More than 67 percent of these hoses were made of PVC. The total phthalate content of the hoses tested ranged from 11 percent to 18 percent of overall weight. All hoses that were made from PVC that were tested for phthalates contained one or more chemicals that have been banned for use in products used by children by the Consumer Product Safety Commission.

SEE ALSO: Top 10 Companies Killing the World with Their Pesticides

Phthalates are one of the chemicals that belong to a “gender bending” groups that cause the males of all species, including humans, to become more feminine. These chemicals cause genital deformation, testicular cancer, and low sperm count, not to mention infertility, in many species and scientists believe that these chemicals are also responsible for problems in humans as well.

Many of these hoses were also made from brominated flame retardants. These chemicals have been strongly linked to cancer, impaired fetal brain development, and reproductive problems.

Some of the other chemicals found in these garden hoses include hazardous metals including tin stabilizers, dangerous levels of lead, and other toxic chemicals.

Consumer products that are made out of toxic plastics are a serious problem as these chemicals can be released into the water that runs through them. This why many researchers and doctors recommend using glass dishes and storage jar instead of plastic, and drinking glasses made of glass. Although it’s true we can’t make glass garden hoses, there are some more natural options that we will discuss later in this article.

Let’s assume that your garden hose is made from some of these toxic plastic chemicals. As it sits outside in the sun, those chemicals begin to leech into the water. This same non-profit research center tested water from garden hoses that were left in the sun for two days and they discovered that:

Generally speaking, hoses made from vinyl and PVC were the worst for leaching chemicals into the water. By the way, they also conducted another study on many common garden products such as gloves, tools, and kneeling pads and found that these items also contained many dangerous chemicals at well.

It’s interesting to note that every single garden hose tested contained several types of plasticizers that are banned in children’s products. Perhaps the federal government doesn’t think children ever play with garden hoses. These chemicals are banned because they are linked to asthma, an interruption of hormonal processes, and birth defects, to name a few.

Is There a Safe Garden Hose?

Look for hoses that are made from polyurethane, or natural rubber. Some hoses list themselves as “drinking water safe” and still some others state that they are lead free. You might also want to consider storing your garden house out of the sun to minimize any chemical leaching that might occur.

You can also significantly reduce your limit to toxic exposure by allowing the water to run until it’s very cold before using it. Water that has been left in the hose, heating up in the sun, will contain the most chemicals.

Having cold water run from the hose doesn’t mean it will be chemical free, but it will at least have a limited amount of toxins. So before you spray your veggies, let the water run for a few minutes until it’s cold and never drink from your garden hose unless absolutely necessary. Read more what’s in your water.

There are other ways to water your plants, however. Consider adding a rain barrel, or maybe even two! This is a large container that you use to capture the water runoff from your roof. Every quarter inch of rainwater can give you about 200 gallons of water to use later. This means you can reasonably collect thousands of gallons of water in one rainy season; more than enough to water your vegetable garden and flowers. Rainwater doesn’t contain choline, calcium, lime, or fluoride so it’s great for watering your veggies, your lawn, even washing your car!

If you would like to try using a rain barrel, be sure you choose one made from natural materials, such as wood, otherwise, if you use plastic, you will run into the same chemical leaching issues as your garden hose.