Super Health Benefits of This One Little Known Berry 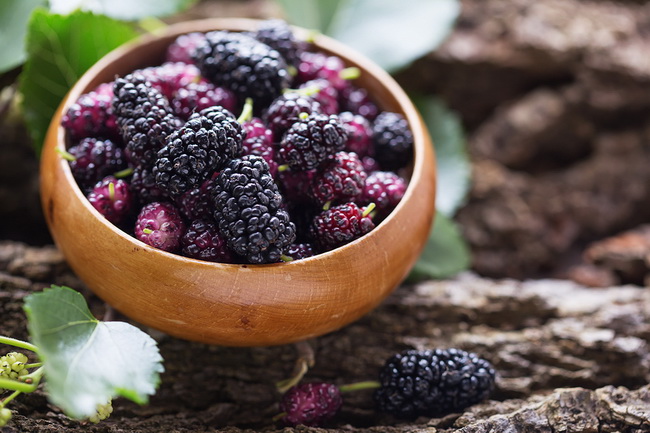 Why is it that strawberries and blueberries get all the attention? Yes, they are super foods, but they certainly aren’t the only ones! A recent study published in the Journal of Diabetes Investigation in July of 2014 showed that mulberries have outstanding health benefits! This was confirmed by researchers in Tokyo recently.

Mulberry trees are originally from China, but are now grown in almost every part of the world. In China, mulberry leaves are used to feed silkworms and the berries are used as both medicine and food. Known for their powerful abilities to protect us from many diseases, mulberries are increasing in popularity as their health benefits become more well-known.

Keep reading and find out why blueberries don’t hold the market share on superfoods!

1.  Slows the Progression of Diabetes

This is perhaps mulberries greatest claim to fame. The study published in July of 2014 showed that mulberries were able to slow the progression of type 2 diabetes. More than 60 percent of the subjects in this study experienced lower and regulated blood glucose levels on a consistent basis when they consumed mulberries as a part of their diet. Traditional medicine in several countries, including China and Tobago, have all used mulberry leaves and berries to encourage balanced blood sugar levels. This research has promising effects that the use of mulberries can possibly treat and prevent cases of diabetes in the future.

Mulberries are often included in many juice mixes due to their high content of vitamins A and C. They are also known to be high in antioxidants that help protect our vision, especially as we age. Antioxidants protect us from the damage that free radicals cause, including deterioration of eyesight and age related macular degeneration, a disease of the eyes that causes blindness.

Both men and women often turn to creams and lotions that contain mulberry concentrations to help treat dry, red, or aging skin. Even if you have sensitive skin, mulberries can help to rejuvenate your skin. The high levels of antioxidants in mulberries remove toxins from the skin, even out the skin tone, fight acne, and moisturize the skin naturally. These same properties also encourage the growth of longer, stronger hair that is full of luster and shine. Find out more natural remedies for hair.

Traditional Chinese medicine has used mulberry as a remedy to stop swelling and skin redness for thousands of years. A recent study conducted out of Romania showed that a combination of mulberry leaves and curcumin worked well for stopping edema and red skin patches that did not respond to other treatments.

5.  Protection for the Brain

One study done in Thailand at Khon Kaen University showed that when male rats who had impaired memories were given mulberries, they had improved memory responses as well as much lower levels of oxidative stress. Mulberries are loaded with choline, a type of tonic for your brain cells and a substance that is known for helping improve the memory. Although more studies need to be done in this area, this one study holds a great deal of promise for those with memory problems.