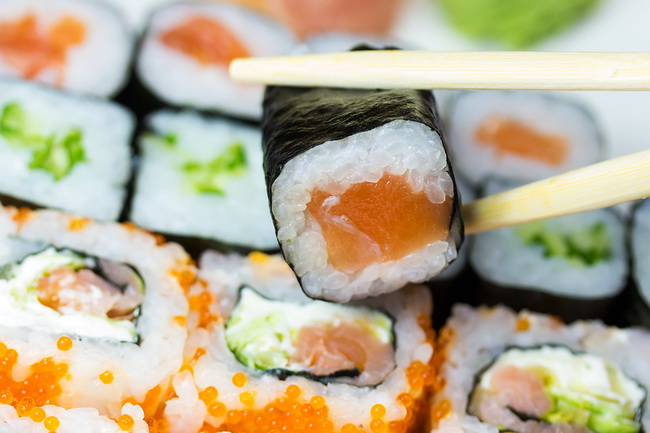 Sushi, a way of life in Japan, is an extremely popular meal in the United States. Most people simply love their sushi because it’s super tasty and healthy for you at the same time. Sushi is super brain food and most people just can’t get enough.

Some people are wary and even shy away from sushi. Why? Well, if you haven’t heard, there are lots of nasty rumors going around about sushi and parasites. If you have been pooh-poohing those rumors, you shouldn’t, because unfortunately most of them are true.

Fish, like most wild animals, can contain parasites, and those parasites can be passed on to you. One of the most common dangers is a little parasite called roundworms, but there are plenty of other parasites, too. Even the consumption of dead parasites can cause you gastric distress, which is a nice way of saying you will be sitting on the toilet holding a trash can in front of you.

There are other things beside parasites to be concerned with, such as bacteria and heavy metals, but it’s the ick factor when it comes to parasites that make everyone’s skin crawl.

Let’s take a look at the top risks you are taking when you eat sushi:

This is a disease that, although rare, has increased in the United States due to the ever increasing consumption of sushi. The symptoms are similar to other types of food poisoning. You get this disease when you eat sashimi or sushi that is infected with the larvae of the parasite “Anisakidae.” Although many chefs see the worm or the larvae and get rid of it, they don’t catch all of them. Most worms will die within 24 hours after you eat them, but some of them really hang on, sometimes for 72 hours or more, wreaking havoc in your digestive system before they finally kick the bucket. They can also cause some people to have allergic reactions for as long as they are in the stomach or the intestines.

This condition is often misdiagnosed in the US, and many doctors will tell you that you have an ulcer or appendicitis, so if you suddenly come down with severe stomach pains, nausea, vomiting and diarrhea, be sure you tell your doctor that you recently ate sushi.

This is a bacterial species that is known to live in raw or undercooked fish and shellfish, especially in oysters. These bacteria can cause fever, chills, vomiting, headaches, cramps, and diarrhea. This infection usually does not require antibiotics, as it is self-limiting and will die off on its own, but it’s going to make you really uncomfortable until it does.

A cousin to the bacteria listed above, it also likes to live in clams, oysters, and crab. For most people it causes similar symptoms to the ones listed above, but unlike its cousin, for some people with weakened immune systems or with other diseases, especially those with liver problems, this microbe can enter the bloodstream and cause a life threatening diseases called septicemia.

Although gastroenteritis from these bacteria is not very common, it does happen, especially for those who are working in the waters that harbor these bacteria.

This is a lovely intestinal infection caused by a tapeworm that lives in fish. Typical fish with this tapeworm are salmon, sea bass, pike, and trout. This infection causes lower levels of vitamin B12 and causes anemia. There are plenty of other parasites that contaminate raw fish, but none of these have yet been reported in the United States.

Although it’s true that the risk of being infected with one of these microbes or parasitic worms in America is very small (there are only about 10 cases of Anisakis infection each year) many cases of infection go unreported or undiscovered, as people do not make the association between their sushi consumption and their illness. The FDA has guidelines for those who sell sushi. Fish must be flash frozen to -31 degrees Fahrenheit for a minimum of 15 hours or -4 degrees for 7 days in order to kill parasites. The fish must also undergo a physical exam known as ‘candling’ to look for worms that might be present in the fish.

If you are dealing with a liver disorder or have a compromised or weakened immune system, you have a much greater risk of developing a life threatening disorder should you become infected. For those with the above health issues, you should practice extreme caution at your local sushi bar, or avoid it all together.

No matter how many guidelines the FDA has in place, there are still people becoming infected, so you would be wise to take precautions to help avoid infection. Find out more everyday foods that can kill you.

Keep reading for the top steps you can take to avoid parasite infection at the sushi bar: