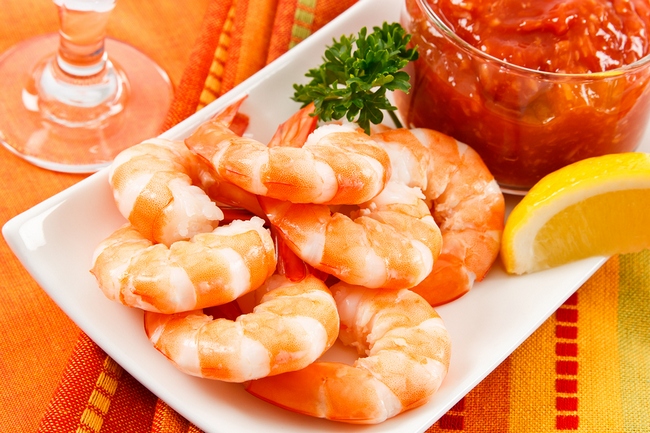 No matter how you eat them- fried in coconut oil, tossed in a salad, skewered on a kabob, or drowning in cocktail sauce- shrimp is a seafood favorite almost everyone loves. It tastes good no matter what you do. Shrimp are perhaps the most versatile seafood of all; you can gulp them with beer or eat them as snacks with champagne.

Because of their small size, shrimp are generally thought of as one of the safest kinds of seafood you can eat. However, studies show that many of the shrimp we consume are full of chemicals that might just have you thinking twice about your next shrimp cocktail.

Because there has been such a huge decline in seafood of all types, “fish farms” for all types of seafood have recently cropped up and they are a big, profitable businesses. Unfortunately, these fish farms have started their own types of hazards to the environment and contain chemicals that can actually endanger your health as well, if you consume shrimp frequently.

One thing you rarely hear about is how farmed shrimp contains many more contaminants than wild shrimp. Farmed shrimp have virtually no oversight or laws regulating what they are fed or how they are to be kept, and there is almost no inspection.

Most commercially grown shrimp are kept in conditions so crowded and unsanitary that this forces the “farmers” to use high levels of antibiotics, pesticides, fungicides, and other types of chemicals in order to prevent disease. You might think that these kinds of conditions only apply to beef cows, chickens, and pigs, but the same type of problems they face are also rampant in the farmed shrimp industry.

Studies show that the types of chemicals and overuse of antibiotics can cause allergic reactions, neurological problems, infections, various types of chronic diseases, and even cancer. Also, the FDA only has the man-power to inspect about 1 percent of all seafood; the chances that you are going to be consuming some of these chemically laden shrimp are pretty darn good.

What types of chemicals are we talking about? How about chemicals from cleaning agents, mouse and rat hair and poop, along with deadly pathogens such as E.coli, and salmonella. Don’t think that imported shrimp is much better; according to Food and Water Watch, about 35 percent of all imported seafood is rejected due to filth and contamination.

In 2009 scientists found that one preservative that is frequently used on shrimp to prevent its discoloration, can increase the risk of breast cancer in women, as well as reduce the overall sperm count in men. In fact, in one study, this chemical was lethal to every single cat used in one study and it was found to be a carcinogen, according to a toxicology study performed by the University of Surrey School of Biological Sciences. In another study, it was found that this same chemical caused high occurrences of a certain type of autoimmune disease that affected the kidneys of mice.

Scientists from Texas Tech University’s Institute of Environmental and Human Health were recruited by a television news station to test samples of shrimp that were purchased from 30 different grocery stores. Two of the samples that had been imported from Thailand and India tested positive for an antibiotic that is a known carcinogen (nitrofurazone). In fact, not only was this antibiotic present in the shrimp, but it was found at levels to be as much as 29 times higher than what is allowed by the FDA. Nitrofurazone encourages the overgrowth of fungi, and has been shown to cause breast cancer in studies done involving female rats.