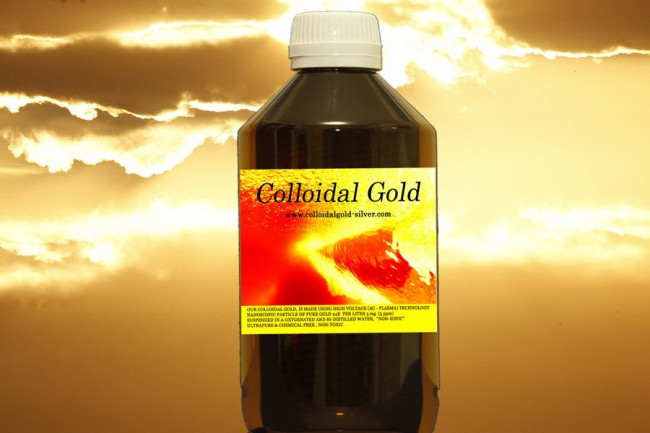 If you are even a semi-regular reader of NaturalOn, then you have heard of the wonderful healing properties of colloidal silver and the scientific research that backs up its anti-bacterial as well as its anti-viral compounds. However, the little known and even less understood is colloidal gold. Like silver, colloidal gold is a colloid that is made from minute particles of gold mixed with water. It’s not anything like silver, however, as far as its health benefits are concerned.

Gold and the human race have a long history together. Gold has been used in ancient Chinese medicine for more than 5,000 years, Cleopatra knew about its uses for health and beauty, and the Egyptian Pharaohs were prescribed to take gold. The Alchemists of Europe and medieval England used it in their search for the Elixir of Immortality.

Gold has had its share of legendary powers as well; whether someone was looking for the Holy Grail, the Golden Fleece, or the goose that laid the golden egg, humans have had a mysterious attraction to gold for eons.

Keep reading to find out what colloidal gold can do for you.

One study showed that persons who consumed 30mg of colloidal gold each day over the 4 week period of the study had improvements in their IQ. The study also showed that when subjects stopped taking colloidal gold, their IQ returned to the same levels as it was before the study within 90 days. The results of this study were published in the Journal of Frontier Sciences. If you plan to use colloidal gold for improved brain function and you don’t want to be reminded of “Flowers for Algernon,” and then consider this a long term therapy.

Probably one of gold’s most talked about health benefit is its incredibly positive impact on the body’s glands. It has regulating effects on our bodies’ warming abilities, which means an end to chills, hot flashes, and perpetually cold feet. It stimulates our nervous system, which actually cause a decrease in pressure. Gold can also invigorate your sex organs, not only acting as an aphrodisiac, but alleviating issues with impotency. It’s no surprise that consuming colloidal gold has been linked to a longer, healthier life.

Gold has been used for centuries to relieve the pain and swelling of arthritis, bursitis, rheumatism, and tendonitis.