Have you ever sat down and tried to make what appears to be a simple decision only to find out that it isn’t simple and that you can’t make a decision? Well, that’s because, for most of us, there really is no such thing as a rational decision. Our entire decision making process is linked to our emotions. In fact, decision making is so connected to our emotions that if you were to suffer damage to your orbitofrontal cortex, (this is just behind your eyes and has a great deal to do with your emotions) you will be unable to make any decision whatsoever. We’re talking what day to make a doctor’s appointment, what time to get out of bed, or even whether to use a black or blue pen. Were it not for our emotions, we would be incapable of making decisions of any kind and reason would not exist.

Our emotions help us make decisions by creating a physical response to information you aren’t even aware that your brain noticed. However, we can be led astray by our emotions as well. They can convince us to give that loser one more chance, convince us to keep putting quarters into that slot machine, or spend our money buying that “lose weight while you sleep” potion. Every choice is a battle between your emotional subconscious mind and your rational conscious self. The best way to make good decisions is learning how to pick which side you should listen to. 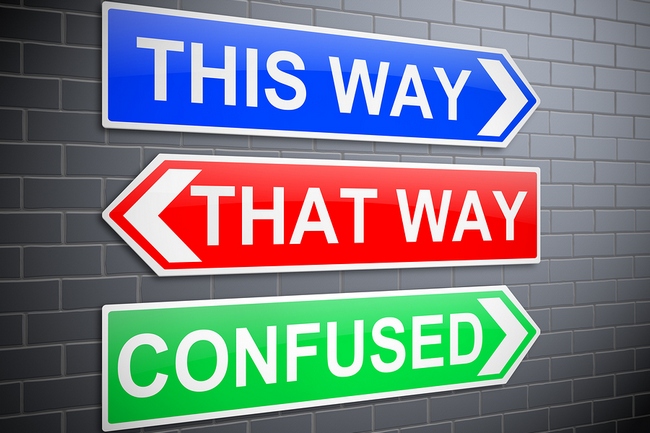 Some of the best decision makers around allow the situation to guide them. The more experience you have in a particular area, the safer it is for you to rely on your intuition. Your subconscious has a treasure trove of reliable information you can draw from. For example, a professional decorator would have a good idea what colors work well for a particular room depending on its light and the style you have in mind, however, if all you have ever lived in is apartments with white walls, you might find it more advantageous to think analytically.

Sometimes, our only real problem is that we have too many choices. If you have ever stood in the cereal aisle of your store, you will know exactly what we’re talking about. Too many of us feel that we can certainly find the best “whatever” that’s out there if we did our homework and if we don’t, that somehow that’s our fault. Having too many choices only serves to make our decision harder and more likely that we will regret our decision later. To increase the odds that you will make a decision you feel good about, try to reduce your options.

Check out this list of the top 7 things you should know, or be aware of, before you make a decision.

1. Think of yourself as a fly

Don’t laugh! This can be very helpful. Think of yourself as a fly on the wall. Remove yourself, so to speak, from the situation and look at it as if you were an outsider. The journal of Psychological Science showed that when people thought about a relationship from a the perspective of a first person point of view, they were less likely to use wise reasoning than if they were to think about the relationship from a third person perspective. Third person reasoning would include other perspectives, considering how the scenario might possibly develop, and consideration of compromises.

2. Be aware of biases

Unfortunately, biases can lead otherwise smart people to make stupid decisions. For example; we hate to admit we are wrong, more than we hate losing money, so we hold onto a stock we told people was a good buy, rather than accept a loss or admit we made a mistake. People also tend to remember vivid examples much better than facts, which is why you will remember that there was a terrible plane crash last week as you are boarding your flight, rather than remember all the statistics that tell you how safe air travel is. So, unfortunately, this means we pay attention to those banners that scream “No Payments for 90 Days” rather than “cash discount”. Try to pay attention to any biases you may have when making a decision.

Emotional intelligence is when you know, and can successfully manage, your own emotions in order to keep you from making decisions based solely on your emotions. This applies to both positive and negative emotions. For example, you want to get a dog. You have a really strong attachment to German Shepard’s because you had one when you were a kid. So you get a German Shepard puppy even though you live in an 800 square foot high rise apartment.

When you don’t take the time to identify your goal, you greatly increase the chance that you are going to end up making a bad decision because you don’t know exactly what it is that you want to begin with. For example, before you change jobs, ask yourself: What am I looking for? A change in careers or just a change of management?

5. Don’t worry about finding the best

Seriously. Eliminate your choices by setting standards, such as, if you never use the internet from your cell phone, you don’t need to spend money on smart phones. Only consider those phones that don’t include Wi-Fi services. Choose from those. Forget about finding “the best”. If you are happy with your decision, then it was a good decision.

For some reason, lighting seems to amplify a person’s emotions, positive and negative. In one study, subjects believed that spaghetti sauce was spicier, characters in a book more aggressive, and people were more attractive in rooms that were brightly lit. This according to a study published in the Journal of Consumer Psychology. Be aware of the lighting, music, and noise levels of your environment before you make decisions, especially important ones. Find out how music can tune up the brain.

If you can, eliminate the need to even make decisions by making rules to live by. For example: you will never have more than 2 glasses of wine, you will go to your yoga class every Saturday morning, or you will not spend more than $50 on a birthday gift for your husband or kids. This helps to keep you from facing decisions later on that, when you think about it, aren’t that big a deal.

Related Posts
how to
Help Us Spread The Word!
Like Us On Facebook To Stay Updated!
I'm already a Naturalon fan, don't show this box again.