A Cold Versus The Flu: How To Tell The Difference 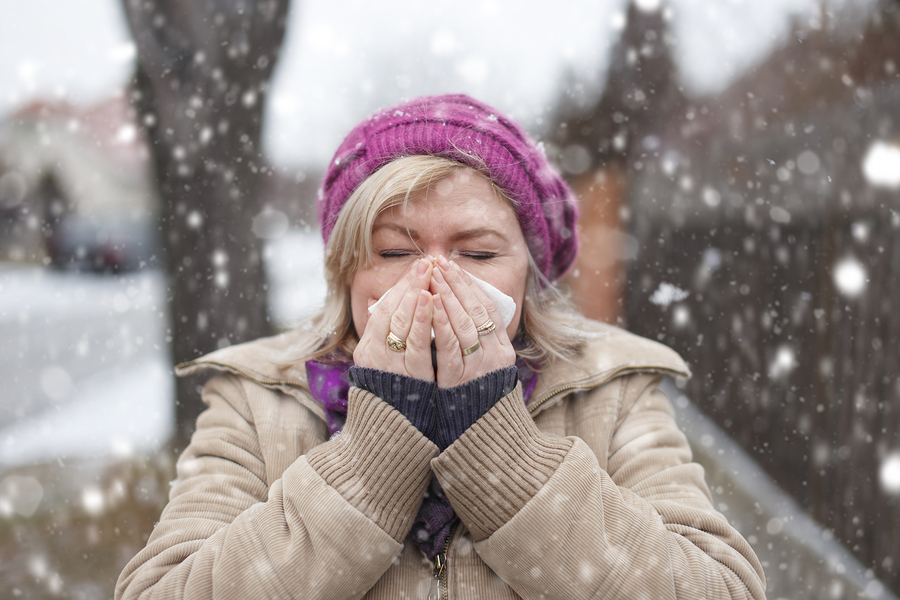 Cold and Flu: Defining the Disease

Let’s highlight the differences between the two diseases in detail. The common cold is spread by the rhinovirus, which belongs to the picornaviradae family of viruses. There are close to 100 different forms of the rhinovirus, and it’s one of the smallest viruses, typically measuring around 30 nanometers in diameter.

The rhinovirus is usually spread by contact with respiratory droplets from the nose or mouth. This can occur from person-to-person contact, simply taking in the virus through breathing, or by touching a contaminated surface. The classic example of the latter is someone sneezing into their hand and then touching a doorknob, leaving trace amounts of mucus through which the cold virus can spread. Sharing drinks is another common method of transmission.

“The flu” is the colloquial expression for influenza, a much more serious respiratory disease caused by the influenza virus. There have been outbreaks of the flu throughout history. One of the most famous and deadly was the 1918 Spanish Flu epidemic, which spread across the world and claimed between 20 to 40 million lives. Luckily, treatment has advanced quite a bit since then. The flu is typically spread in the same manner as the common cold virus.

Differences in Cold and Flu Symptoms and Treatment

The symptoms of a common cold usually appear gradually. These include a sore thought, a runny nose or congestion, persistent sneezing and coughing. Headaches sometimes occur during a cold as well. A cold is most contagious during the first three days after symptoms appear, but is not usually considered a serious disease. A common cold is typically gone within a few days to a week.

The best treatment for a cold is to eat and drink plenty of foods and beverages rich in vitamin C, which boosts the immune system, and to get plenty of rest. Over-the-counter cold medicine can also be very effective when taken as directed.

While cold symptoms appear gradually, the flu hits much harder and faster. Symptoms of the flu are similar to those of a common cold, but are more severe. Someone inflected with the flu virus will probably also experience strong headaches and body aches. A high fever and extreme fatigue are also telltale flu symptoms. The flu will typically begin to improve after two to five days, although sometimes it can last up to a full week.

One additional risk with the flu is that it can make you more susceptible to secondary infections like bronchitis, ear infections or even pneumonia, which can be life-threatening. Call your doctor right away if you think you’re developing any of these secondary illnesses in addition to the flu.

Treatment for the flu is similar to treatment for a cold, although there are specific over-the-counter medications for the flu. For severe cases, prescription antiviral drugs may be necessary. The best policy is to talk to your doctor or pharmacist if you’re dealing with the flu; a cold you can probably get away with treating on your own, but a flu is much more serious.

Of course, an ounce of prevention is worth a pound of cure. Wash your hands frequently during cold and flu season. Eat healthy, nutrient-rich foods; get plenty of sleep, and try to reduce stress as much as possible, since stress can weaken your immune system. There’s a seasonal flu vaccination available, so that may be an option for some. Unfortunately, there’s no vaccine for the common cold, but again—it’s a fairly simple process to avoid contracting it.

Follow these simple steps and you can be reasonably assured of a safer and healthier winter.

Related Posts
cold and fluhealth statisticsnatural living tips
Help Us Spread The Word!
Like Us On Facebook To Stay Updated!
I'm already a Naturalon fan, don't show this box again.