At a national meeting for the American Chemical Society, there was new evidence presented that cilantro, that lovely green herb that is used in salsa and Asian food dishes, removes toxins from tap water.

This could be a huge benefit for third world countries that desperately need cheap ways to purify water that is usually contaminated by industrial waste. Even more advanced, prosperous countries could benefit from finding new, natural ways to clean and minimize any contamination in municipal water supplies. 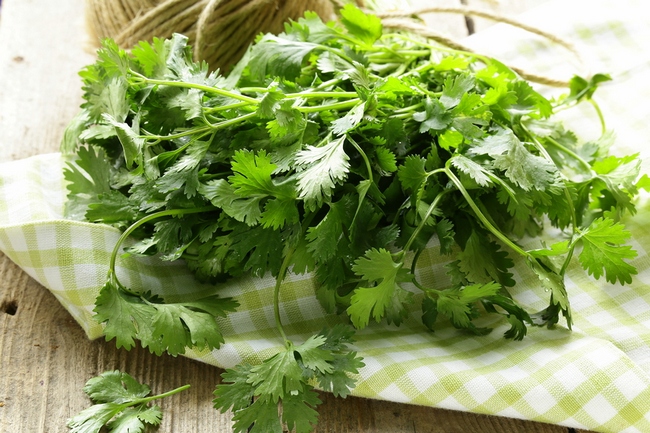 Although in America cilantro can be rather expensive when bought at high-end supermarkets but it grows wild in many countries. Cilantro is easily grown almost everywhere from small gardens to pots on a patio.

Cilantro works as an effective agent called “biosorbent”, which means that it absorbs heavy metals that are seriously toxic to human beings. Just eating cilantro is well known to purify the body of toxins, but it’s now been discovered that adding the herb to tap water can rid it of the toxic chemicals that are loitering within. Read also about other terrific foods that detox the body.

To purchase cilantro in supermarkets for the decontamination of large amounts of water would be cost prohibitive, however, cilantro grows wild in large fields in many of the same countries that have severe problems with heavy metal contamination in their water supplies. Cilantro is readily available, cheap, and is great at removing metals such as mercury, copper, and lead, all known carcinogens in humans.

Researchers also from Ivy Tech Community College in Indiana, along with scientists from Universidad Politecnica de Francisco Madero in Hidalgo, Mexico, have also confirmed the benefits of using cilantro to purify water. The extremely over-populated Mexico City has dumped its waste water for many years into nearby valleys, where it is then used by farmers to irrigate their fields. The heavy metals in the water are then absorbed by foods, which are eaten by consumers. Many organic contaminants can be removed by various means, however, heavy metals must be filtered out, such as through activated charcoal. These types of filtering agents, however, are quite expensive.

Scientists at both universities tested a wide variety of plants; everything from flowers to cacti until they came up cilantro. They quickly determined that cilantro was the most powerful bioabsorbant material they had found. The researchers believe that it’s the structure of the outer wall, which is made up of very tiny cells, which make the plant perfect for capturing metals. Other plants also work, such as parsley and dandelions, but none, so far, have worked as well as cilantro.

Making a filter out of cilantro would be easy as well as inexpensive. Dried and ground cilantro could be inserted into a tube through which water flows, allowing the heavy metals in water to be left behind. Dried cilantro could also be placed in tight mesh bags something similar to tea bags, which could be placed in a pitcher of water to absorb the heavy metals in the water. Cilantro is grown all over Mexico. Cleaning water would be as simple as picking some cilantro, allowing it to dry in the sun for a few days, and using it to clean tap water.  Also, because cilantro isn’t an essential crop, using it to purify water won’t take away crop land needed for other food sources. Read more how to naturally alkalize water at home.

How much cilantro does it take to purify water? Not much. Just a handful of cilantro will clean a pitcher (about 2 liters) of highly contaminated water. In third world countries, not many people have access to carbon type filters that remove toxins from water so having an inexpensive, all natural solution, such as cilantro, would be a wonderfully effective and inexpensive option. Using biosorbents, such as cilantro, can provide the world with a cheap, readily available way to remove toxins that shouldn’t be in the human bloodstream.