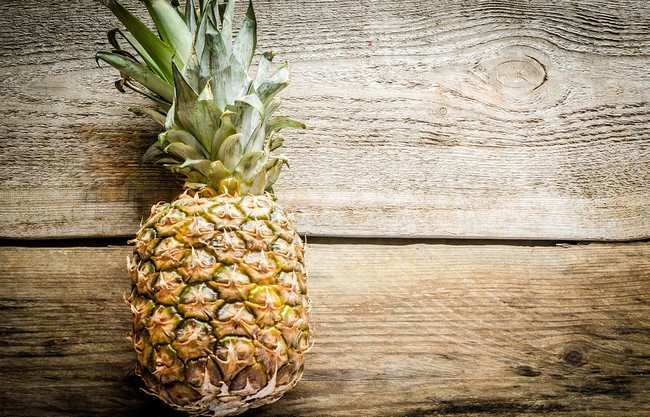 Ok­ – we admit it. That title was clickbait, but that doesn’t mean that there’s no validity here at all. A recent study indicates that a unique enzyme found in pineapples, of all things, could have the potential to treat cancer, and possibly as effectively as conventional treatments.

The Magic of Bromelain

The cancer treatment that people are most familiar with is chemotherapy. This method of treatment has been in use for over 40 years and is known for its unpleasant side effects. Chemotherapy works by means of a chemical agent called 5-fluorauracil, which poisons rapidly-dividing cells and halts RNA replication. The goal of this is to kill the cancerous tumor in the patient, but as most people know, chemotherapy is kind of like dropping an atomic bomb on your body; it will attack the cancer, but it will also attack normal, fast-dividing cells which are noncancerous in nature. This is why people undergoing chemotherapy treatment end up losing their hair for the duration of their treatment.

As you might imagine, many people are curious whether there are alternative treatments that can actually work and don’t have such terrible side effects. There may be a solution in the form of an enzyme few people have ever heard of, that’s found in a fruit they’ve probably eaten their whole lives.

Bromelain is a natural enzyme found in the core of the pineapple. This fruit has been used in various folk remedies by indigenous people in South and Central America for thousands of years. While pineapples are certainly rich in vitamins, only recently have scientists uncovered evidence that the bromelain found in this popular fruit could actually have cancer-fighting properties.

Researchers isolated and extracted bromelain from pineapple in order to test its effectiveness as a treatment for different types of cancer. The scientists compared the effects of bromelain in treating intestinal, breast, and lung cancer tumors, among others, in laboratory mice. These results were compared with those of a standard treatment of 5-fluorauracil (chemotherapy) group and an untreated control group.

The results were astounding. The survival index of all animals treated with bromelain was significantly higher than the other two groups (the one exception to this was among mice with melanoma). In mice with Ehrlich ascites tumors (EAT), the survival index score went up by a shocking 318 percent, compared with 263 percent for the group receiving chemotherapy.

The findings of this study suggest that bromelain may be not only effective at treating cell growth in cancerous cells, but more so than chemotherapy. Bromelain also appeared to be “cyto-selective,” meaning that it attacked only the cancerous cells while leaving healthy normal cells untouched. This means it wouldn’t trigger the awful side effects of traditional chemo.

Now, let’s be clear here. This experiment was done on mice, not humans. Much more research needs to be done before we can go around telling everyone there’s a new cure for cancer. But this research shows that there is hope, and indeed scientific evidence, for potential treatments that are more effective and less taxing on the body than chemotherapy.

Related Posts
cancerfruithealth benefits
Help Us Spread The Word!
Like Us On Facebook To Stay Updated!
I'm already a Naturalon fan, don't show this box again.