Is Your Store Selling Franken Fish? How To Tell What You’re Really Eating

Perhaps you’ve heard that our friends at the FDA have determined that the latest GM product, GMO salmon, is safe to eat? Since the FDA does not require labeling, how are you going to know which fish is a FrankenFish and which is a plain old, good-to-eat salmon from Mother Nature?

The company creating these FrankenFish, AquaBounty, is pretty vague about it, even when asked directly. Neither the fish market, farmers, nor even your supermarket have to tell you whether that salmon is GMO or not.

Some stores, such as Costco, Whole Foods, Safeway, and Trader Joe’s, have already spoken up stating that they have no plans to sell the GMO fish, but even if they change their minds and decide to offer them, they don’t have to tell you and they don’t have to label them. Stores can just put them out on the shelves for sale.

Now, there are a few ways that you can minimize the chances that you grab a forkful of FrankenFish. The United States Department of Agriculture requires a label that states the country of origin. This label, called COOL, can help you determine whether your salmon is real or not. Many retailers will also list if fish is farm-raised or wild.

Although this FrankenFish is supposed to have been grown in captivity, some of the eggs have been accidentally released, prompting lawsuits. This means that any fish, even brown trout that says it was wild-caught, could be contaminated with GM fish. If a fish’s country of origin is Panama, chances are pretty darn good that it is a GMO fish or that it has at least come into contact with GMO fish.

Also, within a short period of time, processed salmon foods, such as salmon spread or salmon burgers, are much more likely to come from these GM FrankenFish. Never buy any type of salmon product that does not clearly state where it came from and that it was wild caught or that it is NOT a GMO fish.

Why does anyone think that Americans are interested in these mutant fish?

This is an Atlantic salmon that has been genetically altered so that it grows twice as fast as a natural salmon. The genes were spliced with both eelpout (a type of fish that looks a great deal like an eel) and Chinook salmon. These fish carry three copies of chromosomes instead of the normal two sets. They are also altered so that all fish are female. Sounds like some project out of Jurassic Park, doesn’t it? We all remember how well that turned out!

But we digress. Although the fish were supposed to be sterile, there is no guarantee and eggs have been produced. 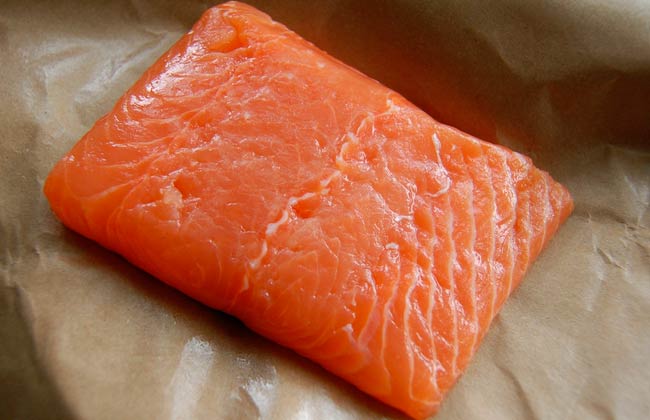 Critics have raised serious questions and concerns about human safety. Although the FDA states that there is a “reasonable certainty of no harm,” others are not so sure.

The approval of AquaBounty’s FrankenFish was done with only the company’s own “scientific” studies, which some have described as being about as scientific as a 5th grade science project.

AquaBounty used very small samples (in one study, no more than 12 fish) – so small that they would have no scientific basis in the real world. Another study, involving allergic reactions, used only six fish.

One of the “fishy” things about this is that the FDA did not regulate this salmon as a food, but as a drug. WTH? The FDA has decided that, starting with this GM salmon, all genetically engineered or modified animals will be regulated under a new “animal drug” provision. This comes under the Federal Food, Drug, and Cosmetic Act. However, the reason the FDA says that it does not need a label is that it is actually the equivalent (nutritionally speaking) to a farmed raised Atlantic salmon. Although we are left asking, is this a fish or a drug?, in the mind of the FDA it is a perfectly normal, everyday, run of the mill salmon.

The Food and Water Watch has been talking to members of Congress about possibly getting the approval reversed or at least reviewed. If this fails, the group has stated that it might file a lawsuit to try to stop the fish from being introduced to the market, at least not without further testing.

Write to your senators and congresspersons, and tell them that not only do you not want these FrankenAnimals, but that if they are going to insist that they are safe, that you have a right to know what you are feeding your family and these foods should be labeled.